Some travelers come to London just to explore the theatre, shopping, restaurants, bars, clubs and tourist attractions of the West End. It’s easily the most crowded portion of town, comprising everything from Oxford High Street (the most popular shopping street in Europe) to Trafalgar Square (home to some of London’s greatest galleries) to splashy Piccadilly Circus and the gobsmackingly enormous British Museum.

The West End is famous for luxury hotels like The Savoy and the The Ritz, as well as the tony offerings of Mayfair. However, some bargain/mid-range rooms can be found in Bloomsbury, Covent Garden, Leicester Square and the Strand.

Soho, known as the heart of the city’s gay community and Chinatown, is largely popular with adults, whereas Covent Garden, with its street theater performances and covered market, is popular with families.

In general, the West End is best suited for shopaholics aged 10 and over, as well as adult travelers who love entertainment and culture and aren’t on a tight budget.

Here is a general map of London’s West End: 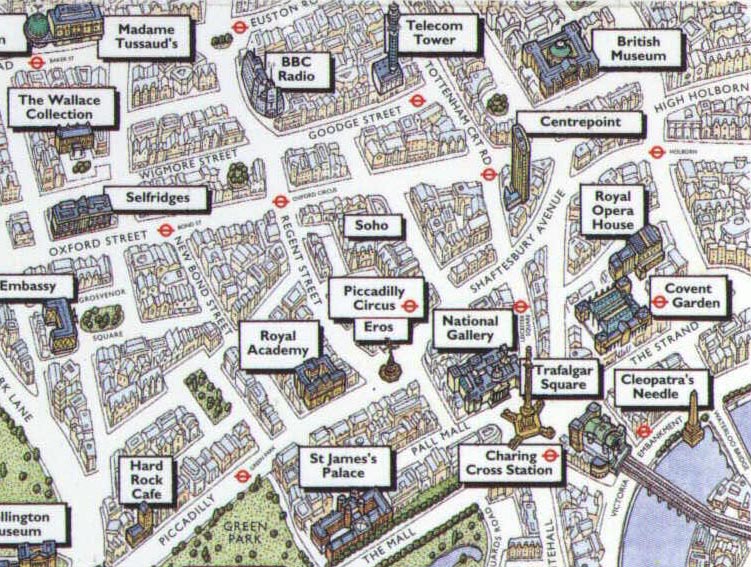 Links to hotels in these areas:

For more information on the area, please see this post on Leicester Square.

Radisson Edwardian Hampshire Hotel
££-£££
Leicester Square, London, WC2H 7LH
127 sedately-furnished rooms invite relaxation; in the most luxurious ones, the bathrooms have been designed by Philippe Starck. Free wi-fi and on-site gym, as well as an elegant British/Mediterranean restaurant (offering afternoon tea for £17.50) and a marble-topped bar.

Set at the southern edge of the West End alongside the Victoria Embankment Gardens, sandwiched gently between historic Holborn and heavily-touristed Trafalgar Square, the Strand offers ornate buildings, close proximity to the theatre district and citywide access via the well-connected Charing Cross Tube station.

Strand Palace Hotel
£-££
372 Strand, London, WC2R 0JJ
A polished budget hotel, especially for its surroundings. Features a buffet restaurant, traditional British brasserie (with roast dinners), two bars (one with a theater theme, the other serving afternoon tea) and and an on-site pub. Three levels of rooms, two of which include access to the Virgin Health Club across the street.

The Savoy
££££
Strand, London, WC2R 0EU
One of London’s most unique luxury hotels, this half-Edwardian, half-Art Deco landmark was re-opened in late 2010 after a long renovation. Featuring one of the city’s best afternoon teas and a chocolatier, as well as two on-site restaurants (French and British) and two Art Deco bars. The wide variety of suites (family, two-bedroom, river view, etc.) are decorated in either period style and include toiletries from local perfumier Miller Harris.

This area contains more restaurants, clubs and bars than any other in London. Known as the center of the city’s gay community, it’s bordered by Chinatown, the theatre district of Piccadilly Circus, and by Oxford and Regent Street, two of the most popular shopping boulevards in Europe.

Swissôtel The Howard
££-£££
Temple Place, London WC2R 2PR
At this revamped Edwardian treasure, the on-site restaurant features Modern British cuisine. The two bars have very different characters: one is smooth, swanky and famous for its whimsical, London-themed “TLSee” afternoon tea; the other is a light, airy spin on traditional English sitting room and leads to a garden atrium with tropical plants and waterfall fountains. Most rooms feature river views, babysitting services are available, and there’s an on-site, full-service spa.

Haymarket Hotel
£££-££££
1 Suffolk Place, London, SW1Y 4HX
Modern and swanky, with a vibrant on-site bar/restaurant that serves modern British cuisine, afternoon tea and a pre-theater menu. The state-of-the-art gym features one of the city’s sexiest swimming pools and a one-treatment room, full-service spa. Rooms include doubles, suites and a townhouse.

For more information on this area, please see this post on Trafalgar Square.