Come out of Covent Garden tube station, turn right and its a short walk to the Piazza at Covent Garden. The site of the former fruit and vegetable wholesale market, the old market moved in the mid-1970’s to a new location at Nine Elms near Battersea, the cobbled square features a colonnaded central market that was designed by Charles Fowler in 1833. There are three main parts to the covered areas, each with a high arched steel framed roof similar to train station designs. The ceilings are glass making the interiors well lit. 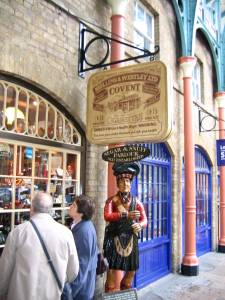 The two largest covered areas both feature markets seven days a week. Apple Market is open Mon-Sun from 10am-6pm, Jubilee Market is open Mon 5am-6pm, Tues-Fri 9.30am-6pm, Sat-Sun 9am-6pm. The market stalls in both vary what they sell during the week and the schedule for Apple and Jubilee is Mon -antiques, Tues-Fri – clothes, crafts, general goods, food, Sat-Sun – handmade crafts.

Throughout the whole Piazza structure there are dozens of small boutique shops selling clothes, books, antiques, arts and many other things, cafes and food outlets, either off the two markets or down narrow arcades. There’s a large below ground level with more shops, open cafes and bars.

You can get into the famous Punch and Judy pub on this lower level as well as on the street level. The Punch and Judy has a dominant position on one side of the Piazza and its balcony gives a great vantage point for people watching around the square, but it can get pretty crowded there.

The whole area around the old market has been pedestrianised and the space there makes it one of the best areas in London if you want to eat or have a drink alfresco. 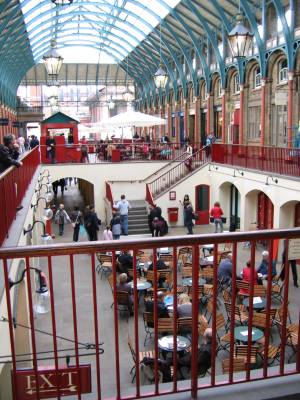 It gets very busy during the summer and at night, branching out from the Piazza are streets that are full of interesting pubs, bars and restaurants and of course Covent Garden is the centre of London’s theatre district so there’s always a lot of foot traffic even if people are only passing through.

In front of the Punch and Judy pub looms the front of St Paul’s Church with its four huge columns. You can’t actually enter the church from the front, when it was built in the 17th century the Bishop of London changed the position of the altar so you have to enter by a side entrance. It’s known as the Actor’s Church because of its association with people in the theatre. Head through a gate on the right hand side if you want to take a look or go around the corner to Bedford Street and enter from there.

Being a magnet for tourists and visitors the Piazza’s also a big draw for street entertainer’s. I guess they’re the same what ever major city you’re in, the painted human statue’s, juggler’s, magician’s etc.

Just be careful of your valuables if you stop in a crowd to take a look, walking around the station area the other day there seemed quite a few people loitering against walls, intently studying people who were going by. A friend of mine’s dad had his wallet pickpocketed on his first trip to London this summer, it’s probably not a major problem but does happen so take precautions. 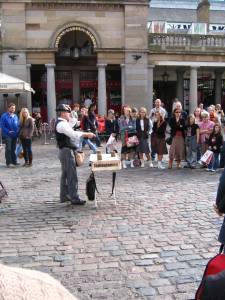 On the eastern side of the Piazza is the London Transport Museum with a big collection of buses,trams, trolleycars, photos and more detailing the history of public transport in London. The museum is currently under going an £18million refurbishment and will reopen in June 2007.

The easiest way to get to Covent Garden if you’re not walking there is the Piccadilly line underground which is about one minute from the Piazza. Covent Garden tube doesn’t have any escaltors, its either elevators or stairs to get to the surface.