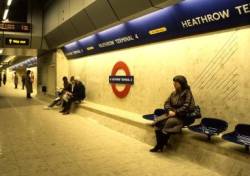 Heathrow is Britain’s biggest and the world’s busiest international airport, located about 14 miles to the west of central London in the Borough of Hillingdon.

There are a number of ways for visitors using Heathrow to get to and from the airport. Here’s a look at the options:

Single fares from all five terminals into London cost £4. Tickets can be bought from ticket offices or machines. To save money on the journey and the rest of your public transport in London, you can purchase an Oyster Card at any station.

The Heathrow Express is a quick and comfortable non-stop train service between Heathrow and Paddington Station, just to the north of Hyde Park in central London.

Trains run every 15 minutes and journey times are approximately the same.
Services run between 5:10am and 11:12pm from Paddington, and between 5:12am and 11:48pm from Heathrow.

The main Heathrow bus station is located between Terminals 1 and 3, reachable outdoors or via underground tunnels. There are a large number of local bus services whose routes include stops at all five of Heathrow’s terminals, but because of the sheer amount of time required (on all routes, there are a large number of stops between central London and the airport), it’s not a WhyGo London-recommened option.

However, if you’ve missed the last Tube out, know that there’s an N9 Nightbus that runs every 20 minutes from Heathrow to central London, the first leaving Heathrow at 1:15am and the last at 5:15am.

Coach services run by a number of companies depart for destinations all over the UK from the Heathrow Central Bus Station. Click here for a comprehensive listing.

Licensed London black taxicabs are available outside Terminals 1-4 and at the taxi rank in the Terminal 5 bus and coach station. Journey times into central London vary widely depending on time of day and traffic, but generally cost between £40-£70.

Taking a cab into London with a knowledgeable driver can be a great way to start your trip, a bit like having your own personal, captive concierge; don’t be afraid to announce yourself as a visitor and ask questions.

Being driven to or picked up from Heathrow is often the most pleasant way to get to/from the airport. Heathrow is very close to the M4 and M25 motorways; the M4 heads east into London ending around Hammersmith and west as far as Bristol, while the M25 is the orbital motorway that circles the whole of Greater London, a quick way to get to the northern or southern sides of town.

All the Heathrow terminals have short and long term parking. In short stay, 30 minutes-1 hour costs about £4, continually rising to about £45 for 24 hours. Long term parking costs about £16 per day for up to four days, and about £15 per day for 5 days or longer. The long stay car parks are open all year round and bus services from them to the airport terminals run every 10-12 minutes.