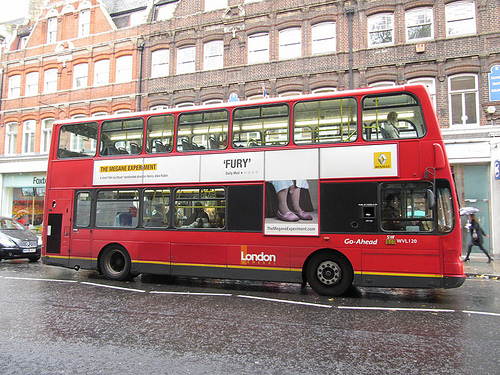 Busesrun all over London and are easy to use, but congested roads mean they generally won’t be the fastest way to travel.

However, the combination of travel and sightseeing make London’s buses a great means of learning the city’s layout.Not all bus services are 24-hour, but most of the main routes feature night hours.

Use this interactive map to plan your bus route.

Bus stops have the London Bus symbol, a white circle on a red background with a white, horizontal line through the middle. If the symbol has the word “Request” written in red on the horizontal line, you’ll have to signal the driver with an outstretched arm in order to get the bus to stop.

Fare pricing is divided into six zones, with Zone 1 in the city center.
The more zones you cross, the more you’ll pay.
Fares are paid in cash on board (or with an Oyster card) and generally start at £2.
Children under 5 can travel free anytime on London buses.

Routemasters, the city’s red double-decker buses were officially discontinued in 2005.
Though iconic, they don’t feature accessibility for handicapped people or strollers.
However, nostalgic Londoners and tourists clamored for their return.

10 Heritage Routemasters are still in service in central London.
Refurbished with environmentally-friendly engines, they’ve been painted to appear as they did in the 1960s.
They run seven days a week, every 15 minutes between about 9.30am and 6.30pm, on two routes:

Oyster cards (also referred to as “Travelcards”) are plastic cards that can be used in place of paper tickets for London’s buses (as well as the Tube, some National Rail services and the Docklands Light Railway).

Worthwhile if your London stay is a week or longer, Oyster automatically works out the cheapest fares for your journeys.

Order one online to be sent to you before you even arrive in London.
Purchase locally in an Oyster Ticket Stop or at a wide variety of transport stations.

Oyster card running low? Money can be added to it wherever one can be purchased.