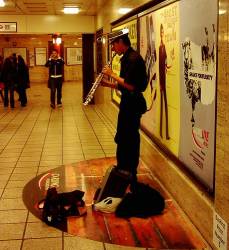 People who are coming to London and hoping to make some money from busking should be aware that playing on the London Underground system, probably the best place to get a huge daily audience, is legal but strictly controlled.

In 2001 London Underground got the law changed to allow licenced busking on the Tube in an effort to raise the quality of musicians performing. There are now 33 licenced ‘pitches’ spread over 22 central London stations where buskers can set up and perform. The pitches are denoted by a coloured half moon on the station floor and a small sign on the station wall.

There are currently 356 licenced buskers and to join their ranks you have to send in an application form and attend an audition before a judging panel, plus get clearance from the police that you don’t have a criminal record. They say that due to the numbers of people applying it might take a while for your audition date.

The quality of musicians I’ve seen lately has been ok but nothing outstanding. I have seen a number of guys busking on the actual Tube trains, obviously unlicenced. They tend to sing for a couple of stops then work their way around the carriage with a plastic cup. Don’t feel your obliged to put anything in there, most people I see don’t.
London Underground are currently looking for a new sponsor for their busking pitches, the brewer Carling’s deal ran out this month.