Gatwick Express to stay in business 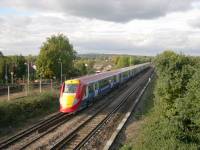 The Gatwick Express train service between London’s Victoria Station and Gatwick Airport is to remain in operation, a year after the Department of Transport said the route would be cut.

The rational then was to provide more capacity on commuter routes between London and Brighton which use the same stretch of track. Now the government say the Gatwick Express will go beyond the airport to Brighton at peak times, doubling the number of express trains from London to Brighton.

Its hard to see how they could have justified getting rid of the Gatwick Express, Gatwick airport is the 7th busiest in the world, with major airlines such as BA, American, Continental Delta, Northwest and Virgin all flying in there. Cutting a dedicated fast train service from there to one of the biggest central London stations seems stupid. The franchise to run it will switch from National Express to Southern Railways next year.