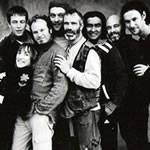 The Southbank Centre by Waterloo Bridge is holding the first of what it says will be an annual series of festivals celebrating the cultural roots of London’s different communities. Called World London the season starts today, here’s what’s on.

17 July – Oki and Kila Kila are a traditional Irish folk band and Oki is a leading figure in North Japan’s Ainu folk scene. They combine for this gig at the Queen Elizabeth Hall with words sung in Ainu, Irish and English. Tickets cost £15 and the show starst at 7.45pm.

20 July – Goksel Baktagir’s Dream of Istanbul Goksel Baktagir is one of Turkey’s leading players of the difficult Middle Eastern harp known as the kanun. He’s joined here by other musicians to perform an energetic contemporary take on Turkish classical music. Tickets are £15 for the show in the Purcell Room.

22 July – A Tribute to Ustad Alla Rakha Ustad Alla Rakha was the world-renowned master of the tabla. Here his son Zakir Hussain pays homage to his father’s musical legacy, together with other soloists and ensembles including Pandit Hariprasad Chaurasia, master of the bamboo flute. This is in the Queen Elizabeth Hall from 7.45pm with tickets £15-£25.