Shakespeare’s birthday at the Globe 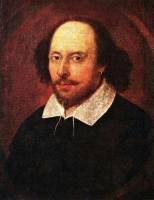 This weekend the Globe Theatre, on the south bank of the Thames close to Tate Modern, hosts a number of events celebrating the birthday of the most famous writer in British history, William Shakespeare.

The Globe’s 2007 Shakespeare birthday celebrations start on 21 April with a series of Sonnet Walks, when sonneteers will entertain walkers as they stroll to Shakespeare’s Globe on tours of Tudor London, starting at either Westminster Abbey or the site of Shakespeare’s theatre in Shoreditch. These walks which include a visit to the Globe, cost £16 and leave every 15 minutes between 10am-12.45pm.

On 22 April you can join in the birthday celebrations as a Venetian style masked procession goes from Southwark Cathedral near London Bridge to the Globe. The procession meets up at 10.30am in the Millennium Courtyard of the Cathedral and if you wear a mask there are prizes for the best ones. At the Globe there will be music, dance, workshops, the chance to tread the boards on the world famous Globe stage plus Italian food and wines, and games for all the family. Its open from 11am-4pm.

On 23 April a series of silent film adaptations will be projected onto the white outside walls of the Globe. The films will be accompanied by the music of composer Laura Rossi played by the Fourth Dimension String Quartet. The films are shown in association with the British Film Institute and run from 8-10pm.