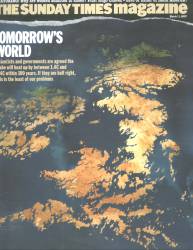 Politicians in the UK are falling over themselves at the moment to show who has the greenest policies, the Conservatives only yesterday announcing how they’d whack more taxes on flying, although what collecting revenue is going to do to stop climate change I still can’t work out.

There’s an exhibition at New London Architecture at the moment called Sustainable London that looks at what a city like London has to do to have less impact on the climate, and also what is actually being done at the moment including how new and existing buildings can be more energy efficient and reduce carbon emssions.

Along with the exhibition are a series of free seminars and talks on making London sustainable, climate change and making the London Olympics as green as they can be. These talks take place first thing in the morning, all starting at 8.30am and you do need to register to get a ticket. Sustainable London is on until 28 April and New London Architecture is located on Store Street just off Tottenham Court Road.

The Sunday Times magazine had a cover story and a long article yesterday on Oxford scientist Mark Lynas and his new book Six Degrees:Our Future on a Hotter Planet which looks at what will happen to the earth if the global temperatures increase by 1-6 degrees, and its pretty scary stuff. 1 degree and the UK’s Met Office Centre for Climate Change predicts fresh water will be lost from a third of the earth’s surface by 2100 as the oceans absorb more heat. 2 degrees and plants start to emit carbon rather than absorb it. 3 degrees and more carbon is released from the soils and vegetation and the rainforests die. 4 degrees, the permafrost thaws, global warming becomes unstoppable and its time to man the lifeboats in the UK as large parts of the country will be under water. 5 degrees, methane is released from the ocean floor, ice has disappeared from the poles and agriculture is almost impossible leading to widespread starvation. 6 degrees, life ends, hydrogen sulphide and methane fill the atmosphere, it says only fungi survive.

So do your bit to prevent this, turn the tv off standby and ride your bike to work.