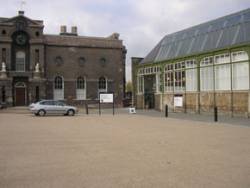 The Greenwich Heritage Centre is on the site of the old Royal Arsenal armaments factory in Woolwich on the south bank of the Thames in the east of London. It combines the former Borough Museum and Local History Library and has a number of activities going on including providing extensive historical records of the local area for anybody trying to trace their family history.

It has a free exhibition called Inside the Arsenal telling the 400 year old story of the Royal Arsenal and Royal Woolwich Dockyard. The Royal Arsenal didn’t appear on any maps even though over 100,000 people worked there during World War 1. The exhibition tells the previously restricted stories of life in the Arsenal through films, pictures and documents and follows the advances in weaponry made there.

The centre also has a range of activities for children including illlustrated talks for schools and Saturday clubs for kids. This week there’s also a free art exhibition opening called Trigger featuring ‘site-specific work by the best of the up and coming artists from SouthEast London.’ The work is inspired by the history, heritage and architecture of the Royal Arsenal and includes paintings, prints and photography. Trigger will be on show at the Heritage Centre from 14-28 April.

The Greenwich Heritage Centre is open 9am-5pm Tues-Sat and is located in Artillery Square off Beresford Street in Woolwich. The nearest train station is Woolwich Arsenal. Map