Egg hunting in London over Easter 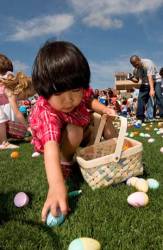 This coming weekend is Easter and its a four day holiday in the UK with both Good Friday and Easter Monday being public holidays. Most people will have those days off work and many will take the oppurtunity for a longer break as schools are closed for two weeks. If you have young kids a number of venues around London are holding special events and Easter egg hunts, here are a selection.

Royal Botanic Gardens, Kew Kew have a number of events over the next two weeks for younger children including a Children’s Spring Trail where they find their way through the gardens and answer questions along the way to win a prize and Farmyard Animals that they can stroke and feed, both these activities run until 15 April. Over the Easter weekend there are giant bunnies to see and an Easter Egg Hunt on Sunday 8 April from 10am-2pm, which is free once you’ve entered the gardens.

Battersea Park Children’s Zoo Easter Egg Hunt On from 5-18 April, this egg hunt costs £1.50 to join and takes place at this zoo along the banks of the River Thames that allows kids to interact with animals. This zoo on the notrheast side of Battersea Park is open daily from 10am-dusk and costs £5.95 adults, £4.50 children.

Horniman Museum Beastly Easter Egg Hunt The Horniman’s egg hunt runs until 29 April and the museum is open from 10.30am-5.30pm daily. Kids can follow a trail through the museum learning about animals and plants and pick up clues to win a prize. Also on Easter Sunday from 12.30-1.30pm and 2.30-3.30pm they’ll be a series of Easter Stories. The Horniman is at Forest Hill, a couple of miles southwest of Greenwich.

Victoria and Albert Museum On Good Friday 6 April as part of their Surreal Things exhibition, the V&A are having a demonstration called Surreal Dreams in Chocolate where chocolate designers Choccywoccydoodah are going to be sculpting surrealist fantasies in chocolate. Hopefully you can eat them afterwards. Its on from 2-5pm.

Kenwood’s Easter Trail for Children Kenwood House is set in a beautiful location on the northern side of Hampstead Heath. They’re holding their Easter Trail from 6-9 April between 11am-4pm, the price is £1 per child.