100 years of the Old Bailey 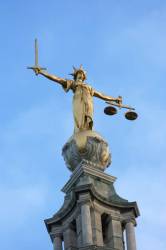 The Queen and the Duke of Edinburgh have been down at Britain’s most famous court today celebrating its 100th anniversary. The Central Criminal Court, otherwise known as the Old Bailey was first opened in 1907 on the site of the famous Newgate Gaol which was London’s main prison and originally built in 1188.

Newgate formed part of the walls of the City of London until it was demolished in 1904. A courthouse had also been part of the prison since the 17th century and public hangings were held there up until 1868. Once the new court opened it handled some of the most infamous cases in Britain in the 20th century including those of American Dr Crippen, the Kray twins and the Yorkshire Ripper.

Trials at the Old Bailey are open to the public, although if you do want to go and see the theatre of a British court room you must be over 14 years of age and you can’t bring any camera equipment, phones, bags, notepads, food or drink into the court, and the Old Bailey doesn’t have any cloakroom facilities for the public to leave stuff at, so go along with only the essentials on you.

You can find the Old Bailey on the street of the same name, off of Ludgate Hill which is just west of St Paul’s Cathedral. Look out for the gold statue on top of it with the woman holding a sword in one hand and a set of scales in the other, and if you’re in court and the judge happens to speak to you don’t forget to address him as My Lord.