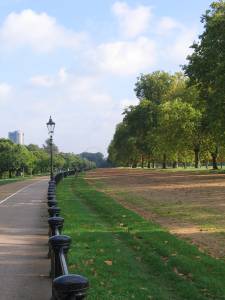 Situated seamlessly adjacent to Kensington Gardens, 350-acre Hyde Park is one of the largest green spaces in London. One of the Royal Parks, it’s located between two of the city’s most fashionable neighborhoods, Mayfair and Knightsbridge.In 1536, Henry VIII seized the land that now comprises Hyde Park and Kensington Gardens from the Church to use privately for deer hunting; it wasn’t until 1637 that Charles 1 opened the land for public use.

Then in 1730, George II’s wife, Queen Caroline, had the flow of the Westbourne River dammed to create The Serpentine, the sprawling lake that now curves through Hyde Park and Kensington Gardens, separating the two.

Because of its size, Hyde Park has long been the site of major events in London. In addition to duels, horseracing, concerts and political demonstrations throughout its history, it was also the site of the Great Exhibition of 1851.

The Serpentine features the Dell, a batwing-roofed restaurant with high glass windows and an outside terrace (open 9am-8pm in summer and 10am-4pm in winter) and a boathouse where you can rent rowing and pedal boats (see this page for prices and times).

The lake attracts a great deal of bird life, generally well-fed by visitors; and you’ll see ducks, swans, grey-leg and Canada geese, cormorants, herons and gulls around the edges of the Serpentine. 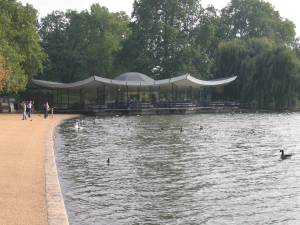 In Speaker’s Corner, at the top right corner of the park, it’s legal to gather a crowd and address them on just about any subject. Sunday mornings at about 10am the most popular lectures/rantings begin.

A new nature discovery center for children, the Look Out, will hopefully open in Summer 2011. Designed to educate children about the importance of caring for the environment, the center will include a pond, trails and classrooms.

Free tours of Hyde Park are given throughout the year, and the park is open year-round from 5am to midnight.