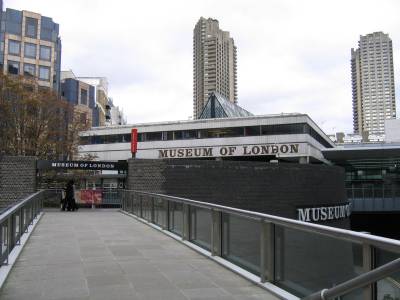 The Museum of London, opened in 1976, chronicles the city’s history from prehistoric times to the First World War. Housed in a seemingly uninspiring, flat-roofed 1970s building amidst towering glass office buildings, inside the Museum is a big, open, educational and exciting London destination.

Exhibits here feature everything from clothes, weapons, coins, paintings, maps, building models, furniture and vehicles like the French-made Unic, used as a London taxi from 1908 to 1922.

Film clips from the late 19th and early 20th centuries run on a continuous loop, and the museum is full of fascinating photography from these same periods.

In addition to the museum’s permanent exhibitions, there are temporary exhibitions on display throughout the year that offer in-depth, specific explorations of London that are sure to surprise you and enhance your visit to the city.

The Museum of London is at the corner of Aldersgate Street and London Wall, the site of the defensive wall built by the Romans (parts of which can be found within the museum grounds).