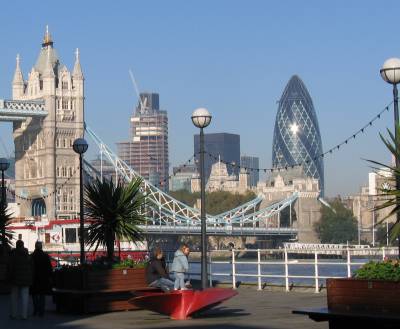 One of the most distinctive buildings in the City of London is 30 St Mary Axe, otherwise known as The Gherkin. Opened in 2004, and festooned with diamond-shaped panes of glass from top to bottom, this uniquely missile-shaped office tower stands on the site of the old Baltic Exchange (the former headquarters for world shipping sales that was severely damaged by an IRA bomb in 1992).

As London’s sixth biggest building, you can get a glimpse of the 580 foot-tall Gherkin from a large variety of vantage points around the east and south stretches of town.

The Gherkin is a private office building found along Bishopsgate, between the Tube stations for Liverpool Street and Monument. (Map) Considered one of the city’s “greenest” buildings, the Gherkin uses approximately one half the energy of a typical structure of its size, combining natural ventilation with an enormous amount of natural light. 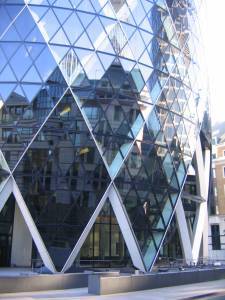 The building’s top floor hosts 40/30, the highest restaurant and bar in London, offering 360° views over the city. Though generally reserved for the use of resident businesses, 40/30 is available for private functions on weekends and after 6:30pm on weeknights.

Visually, the building provides a stark contrast to some of London’s oldest structures, including St Paul’s Cathedral. Infamous for its unique shape and subsequent nickname, it’s a fair bet that if you asked a handful of Londoners to describe 30 St Mary Axe, most wouldn’t have a clue what you were talking about — until, that is, you mentioned the Gherkin.