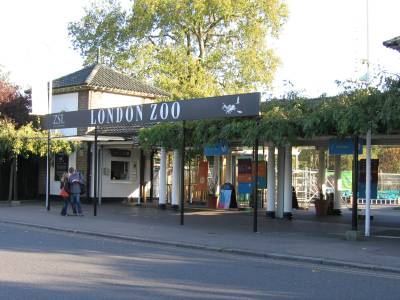 The London Zoo, located on the north side of Regent’s Park and housing over 600 species of animals, is one of London’s biggest tourist attractions.

The zoo’s land was purchased from the Royal Parks by Stamford Raffles of Singapore fame, and was opened in 1828. Run by the Zoological Society of London, it was only open to Society members until 1847. It holds a number of first’s among world zoos including its Reptile House (1849), Public Aquarium (1853), Insect House (1881) and Children’s Zoo (1938).

For the Zoo’s first 65 years of operation, every animal with tropical origins was kept inside until it was finally determined that they wouldn’t die if exposed to London’s air.

The main entrance to the Zoo is on the Outer Circle road that runs around the edge of Regent’s Park. Near the front, the famous Reptile House is on the right; a little slice of heaven for snake and lizard fans, a scene from the movie Harry Potter and the Philosopher’s Stone was filmed in here. 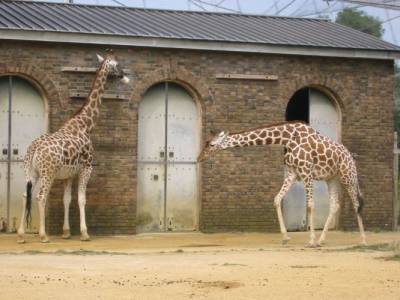 Heading down towards the southern part of the zoo, you’ll pass enclosures for bears, Komodo dragons, hippos, big cats and monkeys, as well as the Children’s Zoo, which has a large selection of mammals that kids can walk with and pet.

Up near the Gorilla Kingdom is a section called Animals in Action, a seated amphitheatre where keepers bring a selection of birds and small mammals to show off their flying, leaping and climbing abilities.

Nearby is the Zoo’s popular Penguin Pool, with curved ramps over which whole flocks of penguins waddle. The daily afternoon feeding time draws a crowd to watch the keepers hand out buckets of fish.

Crossing over to the north side of the Outer Circle, you’ll find the giraffe, zebra and large African mammals enclosures. Backing on to the Regent’s Canal is the Snowdon Aviary, a huge net enclosure over high aluminium poles that allows some of the zoo’s rarer birds a place to fly.

London Zoo is open every day but Christmas, from 10am-4pm . Entry costs vary throughout the year.