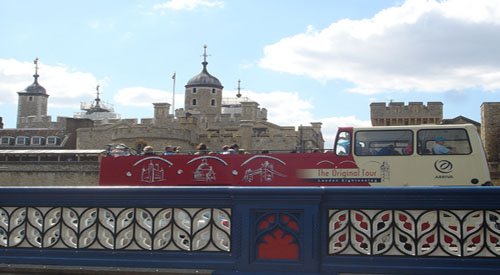 Taking a sightseeing bus tour is a great way for first-time London tourists to simultaneously learn the city’s layout and take in some of its most famous attractions. These tours can also be fun for travelers who’ve been all over London, and yet still haven’t seen the city from the touristy side of the street.

Here’s a look at some of the main companies offering sightseeing bus tours in London:

The Original London Sightseeing Tour
Started by London Transport in the early 1950s, this company has four different tours with over 90 stops in the central London area. Tickets are valid for a 24 hour period and you can hop on and off their buses as much as you like during that time.

Buses are marked with colored triangles to signify their particular route:

Live guided commentary in English is given on the Yellow route, while audio commentary in six languages is available on all other routes.

Tickets can be purchased in person at the company’s London Visitor Centre on Cockspur Street, just to the west of Trafalgar Square (Map), open daily from 8:30am – 7pm.

Note: The Original Tour has a fleet of modern buses that are all equipped to take disabled passengers.

The Big Bus Company
Another major tour bus operator in the capital, they offer a 24-hour hop on, hop off ticket for any of their 80 buses and any of their three, color-coded tour routes (red, blue and green).

Each bus tour ticket comes with a free guided walking tour of London and a free, one day river boat pass so you can hop on and off any City Cruise cruise between Westminster, Tower Hill and Greenwich.

Bus tour tickets also entitle you to a Reward Voucher Book, which gives discounts in restaurants, shops and attractions and can be used for up to a week after your bus tour.

London Duck Tours
A unique combination of a bus and boat tour, London Duck Tours use amphibious DUKW vehicles which were orginally designed to ferry supplies from ship to shore during World War II. The company’s fleet of five has been completely rebuilt and painted bright yellow.

The vehicles, which meet strict safety regulations, seat 30 and take visitors on a 75-minute tour. Starting by the London Eye, the tour passes landmarks such as the Houses of Parliament and Trafalgar Square on the road before entering the River Thames from a slipway at Vauxhall and cruising down the river.

British Tours
This company offers a more personalized tour service, taking as few as two people in a car through to full coaches of visitors. Tours can last between 2-10 hours, depending on your needs.

British Tours’ expert guides can take you to all the major London landmarks and attractions, as well as suggesting many off the beaten track. They can also provide private London tours in a variety of languages, including French, German, Spanish, Italian, Russian, Japanese, Cantonese and Mandarin.

This individual, tailored service doesn’t come cheap, but prices depend on the number of people in your group and the length of the tour you’d like. For example, the cost of a full day’s tour in London for 3-4 people is £395.