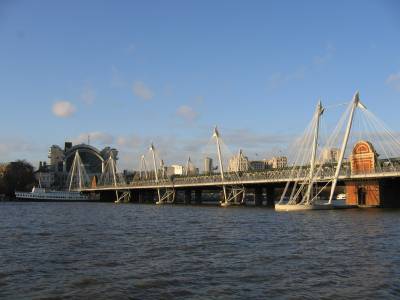 Central London has three major pedestrian bridges across the River Thames: the Millennium Bridge near the Tate Modern, and the two Golden Jubliee Bridges. Opened in 2002, the latter two were named in honor of the Queen’s fiftieth anniversary as monarch.

They’re also known colloquially as the Hungerford Footbridges for their placement on either side of the Hungerford Railway Bridge, which is used by trains traveling between south London and Charing Cross Station.

The Footbridges were the result of a 1996 competition, and the designers had to take two key challenges into account: the railway bridge had to be kept in use during construction and the Bakerloo Underground Line lies directly beneath the construction site. Construction was, thankfully, accomplished without major drama or mishap.

Located just about halfway between Westminster and Waterloo Bridges, the Golden Jubilee Bridges provide a lovely pair of paths across the river. Each footbridge is 320 meters long and over 4 meters wide, and despite their high pylons and supporting struts, they offer some excellent vantage points for taking photos.

The bridges stretch between the Embankment near Charing Cross Station and the South Bank near the Royal Festival Hall and London Eye. (Map)