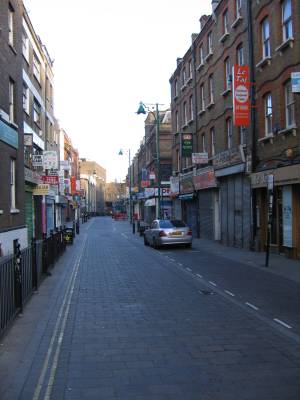 Brick Lane in east London has become famous as one of the curry centres of the city. British people over the last 30-40 years have come to the point where curry is almost the unofficial national dish, everybody loves going for one especially with a big group of friends.

It’s hard to find a neighbourhood anywhere in London that won’t have a couple of Indian restaurants or curry houses, Brick Lane’s reputation has grown because of the concentration of so many in a small area. The Lane and surrounding streets get really busy on weekends and the restaurants were known for having people touting for customers up and down the street but I think there’s been a clamp down on that recently.

Brick Lane’s at the heart of the old East End and has for centuries been a place where new immigrants have settled, Protestant French Huguenots fleeing France in the 17th century, Jews from eastern Europe arriving after them and in the 20th century thousands of Bengalis coming and making their home there. They’ve become so synonymous with that part of the East End that the areas known as ‘Banglatown’.

If you come out of Liverpool Street station you’re in the middle of the modern glass office block world of the City of London and all the money that goes with it. Head east a short distance and once you reach Commercial Street there’s a switch back from glass and steel to the narrow streets and closely packed brick buildings of Brick Lane and its surrounding streets.
A couple of minutes from the bottom of Brick Lane is Whitechapel where Jack The Ripper went about his business.

As well as being an all year centre for somewhere to get a good dinner Brick Lane holds a couple of annual festivals to showcase the culture of the people and the food they make.
The Brick Lane Festival is held is held on the second Sunday in September and attracts over 50,000 people to watch and sample music, dance, films, fashion shows, street entertainers and the food stalls provided by the area’s restaurants. 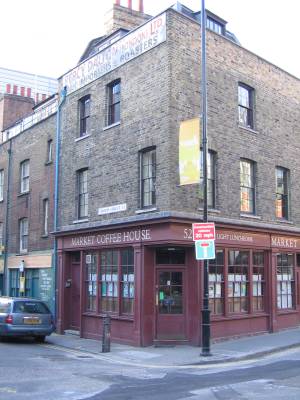 The second festival is the Baishakhi Mela, the Bangla New Year Festival which is supposed to be the largest Bengali celebration outside of Bangladesh attracting Bengalis from all over the UK. This is a colourful event starting with a procession of traditional dancers, musicians and floats to the main festival site where the day continues with all different types of Bengali and Indian music and dance. Brick Lane is closed to traffic for the day and turned into a market and food festival.

Every Sunday there’s a street market on Brick Lane from sunrise to around 1pm selling just about everything, new and used, head to the northern end of Brick Lane and also the offshoots of Bethnal Green Road and Cheshire Street.

There’s a novel by author Monica Ali called Brick Lane that came out 3-4 years ago that is currently being made into a movie. The stories about a Bangladeshi girl who comes to England for an arranged marriage and the difficulties she has with her new life. The film producer’s wanted to shoot on Brick Lane this summer but were met with angry protests from the local Bangladeshi men who didn’t like the way they were portrayed in the book. The film went elsewhere to shoot.

Fournier Street off the centre of Brick Lane is famous for the 18th century houses used by the Huguenot’s for their weaving industry. at the junction of the two streets is a mosque that used to be a synagogue and a church.

The nearest tube stations to the Brick Lane area are Liverpool Street, Aldgate East or Shoreditch.