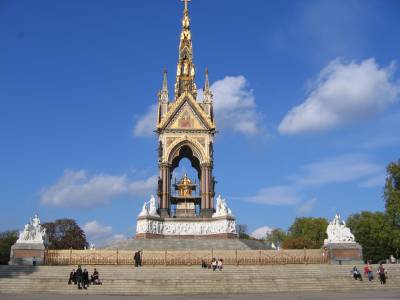 Beside Kensington Gardens and across the street from the Royal Albert Hall is a splendidly ornate memorial honoring Prince Albert, the dearly beloved husband of Queen Victoria, who died at age 42 in 1861.

Commissioned by Queen Victoria and designed by Sir George Gilbert Scott, the memorial, which took about 15 years to build, is 176 feet high with a black-and-gilded spire, a multi-colored marble canopy and almost 200 sculpted figures. The most singular detail of the monument is a gleaming gold statue of Albert himself, seated on a throne; this figure, created by John Henry Foley and Thomas Brock, wasn’t put in place until 1875, three years after the memorial opened.

Albert was prince during one of England’s most productive and powerful eras, both financially and culturally. Surrounding the figure of Albert is the Frieze of Parnassus depicts some of Albert (and Britain’s) favorite contemporary architects, composers, writers and fine artists, as well as a canopy that celebrates the practical arts and sciences. Around the base of the memorial, four sculptures (one in each corner), symbolize Britain’s agriculture, manufacturing, engineering and commerce.

About thirty yards from the base of the main memorial, in a nod to the reach of the then-considerable British Empire, are four sets of Carrera marble-sculpted, romanticized depictions of people and animals from Europe, Africa, Asia and the Americas.