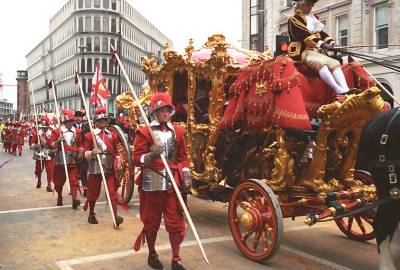 One of the quirks of London is that every year there’s a huge parade through the streets of the City and I’m guessing about 99.5% of people couldn’t tell you the name of the person all the attention is for.
Sure its the Lord Mayor’s Show and the new Lord Mayor is the centre of it but what’s his or her name. I couldn’t tell you and I think very few people in the whole city could, or last year’s Lord Mayor or the one before that. The Lord Mayor of London is actually a pretty low profile job except for his one big day, in fact the most famous Lord Mayor, Dick Whittington, is a fictional character although based on a real mayor.

Visitors might be confused between the Mayor of London and the Lord Mayor. There’s been a Lord Mayor of London since 1189 but the area he was mayor for was the historic old centre of the city that is today known as the City or the Square Mile because its about one mile square in area. The Mayor of London is a political creation of the present government, is elected by the whole populace and exercise’s certain powers over the whole of the Greater London area.

The City of London is run by the Corporation of London and its 107 trade associations appoint the Lord Mayor through a show of hands vote from the City’s aldermen and the Lord Mayor holds the post for one year. Apart from being Lord Mayor he/she also gets the title Admiral of the Port of London, probably means they’re in charge of a few tug boats.

The Lord Mayor gets an official residence, the imposing Mansion House, not far from St Paul’s Cathedral and his main duties throughout the year include wining and dining foreign dignitaries, a tough gig.

The Lord Mayor’s Show has taken place every year since 1215 and though the dates have moved around slightly its now set at the second Saturday in November, and the Lord Mayor must travel to the Royal Courts of Justice and swear allegiance to the Crown.

This year’s show is on, 11 November 2006, and starts at 11am at the Guildhall(Gresham Street) then heads east towards Bank before horseshoeing back along Cheapside and stopping at St Paul’s Cathedral for a blessing and then off down Ludgate Hill and Fleet Street to the Royal Courts of Justice in the Strand for the swearing of the oath ceremony. The show features 6,000 people, 21 marching bands, 66 floats and 21 carriages among other things.

The return journey goes a different way along the Victoria Embankment by the river and up Queen Victoria Street to the Mansion House.

The Lord Mayor’s Show website says the outward journey takes about 1.5 hours and that the Lord Mayor will be back at Mansion House at 2.30pm. Their advice is that the streets will be very, very crowded, between 500,000-1million people, so get there early if you can and also that after the show at 3pm you can join a free walking tour given by the City of London’s Guide Lecturers starting at Number One Poultry, which is the yellow bricked building with horizontal red layered stripes at the eastern end of Cheapside.

To round off the Lord Mayor’s day he starts a huge firework display at 5pm on the River Thames and they advise that the best place to watch is between Waterloo and Blackfriars bridges.
I’m going to go along tomorrow and see if I can squeeze in amongest the action and maybe find out the name of this Lord Mayor character.