“When a man is tired of London, he is tired of life.” Dr. Johnson’s famous quote is as true today as it was 200 years ago, and one could spend years trying to decide which of the city’s ever-expanding sights are top of the heap. While there’s probably a different list for every interest imaginable, here are five London attractions few visitors can resist while on their London holidays. 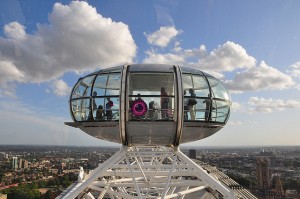 Created to celebrate the millennium, this giant Ferris wheel carries 32 egg-shaped glass gondolas, each capable of holding 25 passengers. There are superb views in every direction and the wheel’s slow rotation gives sightseers plenty of time to identify major landmarks during the 30-minute ride. On a clear day, the view from the top extends all the way to Windsor castle, and passengers are free to stand, sit, and move about the gondola throughout. The Eye is wheelchair accessible and located on the south bank of the Thames near Waterloo station.

The Tower of London

Over the past thousand years, the Tower has been home to kings, queens, gossips and prisoners. Here the sons of Edward IV vanished while in the care of their uncle, the future Richard III, and Jane Gray, Anne Boleyn, Catherine Howard, and Thomas More were held prisoner before their executions. History pours from every brick, and sleek black ravens still come at dusk to be feed on raw meat distributed by Beefeater-clad guards. Also housed here are the Crown Jewels, the Tower’s most popular attraction and worth waiting in line to see.

Dating back nearly a thousand years, Westminster Abbey has been the coronation site of every British monarch save two, Edward V and Edward VIII. In addition to being architecturally beautiful, it’s one of the most desirable burying spots in the world. Geoffrey Chaucer, Isaac Newton, Ben Johnson, Oliver Cromwell, Charles Dickens, Charles Darwin, Rudyard Kipling, and Lawrence Olivier are just a few of the notables resting here. Provided there is no special event scheduled, the public is admitted to this historic and majestic building.

The young woman who became Madame Tussaud learned the art of life-sized wax modelling in Paris on the eve of the Revolution. Imprisoned during the Terror, she won her life and her freedom by agreeing to model the heads of guillotined aristocrats. She eventually fled to England, where she opened her own exhibition hall. Her work has been meticulously continued, and today’s visitors can see some of the artist’s original works as well as a galaxy of instantly recognizable singers, athletes, world celebrities, and film stars.

Markets capture the lively, inexhaustible spirit of London like no other attraction. There are some 20 significant markets in London, each with its own theme and flavour. Among the most popular market Portobello Road in Kensington, the world’s largest antiques market, open Saturdays; Borough Market in Southwark, the city’s oldest market and heaven on earth for foodies, open Thursdays through Saturdays; and the East End Sunday markets around Brick Lane, including the Old Truman Brewery and Old Spitalfields.