Security stepped up in the UK 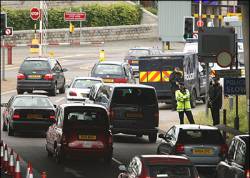 The attempted terrorist attacks on central London and Glasgow Airport over the weekend are having a knock on effect on travellers and people attending large events with security being ramped up.

Most major airports including Heathrow, Gatwick and Stansted have stopped cars including taxis from dropping off or picking up passengers in front of terminal buildings. If you are going to or from the airports by car you’ll have to pull into one of the car parks to unload. There’s a much greater police presence around airports and train stations, and it looks like they’re using mobile number plate recognition vans to check cars and they’ll be carrying out random searches of vehicles. Anybody fitting the profile of the bombers can expect some extra attention as well.

Airport security are also going to spend more time individually frisking each travelling passenger and you’re advised to turn up at least three hours before travelling on a long haul flight, two and a half hours for a European flight.

Concrete barriers have been installed at the entrances and exits of the All England Club for the Wimbledon Tennis Championships and the advice is to come by public transport, cars will be restricted. It’ll be interesting to see how they handle the start of the Tour de France this weekend. There’s a big opening ceremony on Friday, the Prologue around the heart of London on Saturday and Stage 1 on Sunday, a large area and a massive crowd to protect.