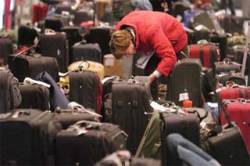 The baggage chaos at Heathrow especially involving British Airways looks like its going to continue for a while. BA currently has around 22,000 bags looking for owners and it admits that with more luggage coming into the system each day it could be weeks before some people are reunited with their bags.

The problem seems to be two fold. A lot of the lost baggage belongs to passengers from the US and Europe transfering through Heathrow who have been allowed two pieces of hand luggage at their initial departure point but are only allowed to take one on board at Heathrow. The other piece has to be checked in and unfortunately according to British Airways ground services manager Mike Henwood ‘the real problem is a shortage of staff and equipment to move luggage around.’ BA is trying to use their office staff as emergency baggage handlers but how a major airline like them can have such a staff shortage coming into the summer months is ridiculous. This is also having a knock on effect on people coming through the arrivals hall according to The Times with pasengers having to wait 3-4 hours to get their bags.

Its a problem that doesn’t sound like its going to clear up any time soon, the only advice would be take just one piece of hand luggage and put anything of value in that, and expect the worst as regards your checked in luggage with BA.