Advice on emergencies in London 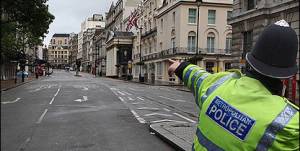 London woke up this morning to a major bombing being averted in the Piccadilly Circus area thanks to an observant ambulance crew, and at this moment (4pm) police have cordoned off Park Lane on the eastern side of Hyde Park because of suspicious package on a bus.

London Prepared is the website of the London Resilience Partnership, an alliance set up after 9/11 involving the police, fire and ambulance services, transport, NHS, central and local government, Greater London Authority, utilities and the military to plan and prepare for terrorist attacks and major disasters. It offers advice to Londoners, businesses and visitors on preparing for an emergency whether terror, health or weather related, what to do if one happens, travelling safely, staying safe in the city and reporting crimes.

It has information on evacuation plans and emergency exercises and has links to various agencies and organizations who’ll be involved if a dramatic situiation occurs in London. One of the links is to MI5, the Security Service’s website where among other things they give the threat risk of terrorist attacks on Britain, currently rated severe. The levels of risk are Low-an attack is unlikely, Moderate-an attack is possible, but not likely, Substantial-an attack is a strong possibility, Severe-an attack is highly likely and Critical-an attack is expected imminently.