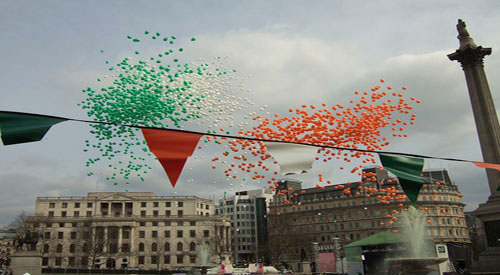 Slowly easing into Spring but still the low season, March in London is your chance to find an amazing deal on a flight and hotel room, and have more elbow room to enjoy your favorite London attractions!

For March temperatures and suggestions about what to pack, see London Weather.

Pancake Day
Tuesday, 8 March 2011
Pancake Day is also known as Shrove Tuesday, the day before the start of Lent; before the traditional 40 days of fasting begins in Britain, it has long been customary to use up eggs, milk, sugar and flour to make crepe-like pancakes fried on a hot pan.

Pancake races to raise money for charities have also become traditional, whereby individuals or teams run/walk/waddle over a course carrying a frying pan and flipping a pancake as they go.

Here are the main races, all free to attend:

St Patrick’s Day
Thursday, 17 March 2011
To celebrate the holiday in traditional style (that is, with a Guinness in hand), check out the Irish Festival at Old Billingsgate. Also, be sure to see: Best Irish Pubs in London

The Affordable Art Fair
Thursday, 10 March -Sunday, 13 March
Held at the Battersea Evolution in Battersea Park, this fair highlights the work of 120+ galleries offering original artwork for no more than 4000. Click here for info on times and advance tickets.

London Beatles Day
Sunday, 13 March 2011
London Beatles Day’s were first started in 1990 and now attract dealers, collectors and fans from the US, Europe and the Far East, to buy or trade records, cds, books, clothing, posters and more Beatles memorabilia than you ever knew existed. This sale, the first of the year, will be held at the the Park Inn Hotel in Russell Square. Admission is £4.

Six Nations Rugby
Sunday, 13 March 2011: England vs. Scotland at Twickenham
One of the highlights of the annual sporting calendar in Britain, this rugby competition is held between the national teams of England, Scotland, Ireland, Wales, France and Italy; each team plays the other once. Click here for directions to Twickenham Stadium.