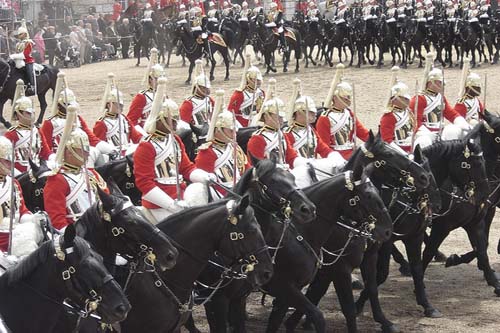 Warm days and long nights with light lavender skies signify June in London, and so does the military pageantry of Trooping the Colour.

June is high season in London, but you can still find an amazing deal on a flight and hotel room and spend long hours outdoors, enjoying special summertime events all across the city!

For June temperatures and suggestions about what to pack, see London Weather.

Beating Retreat
Wednesday, 8 June – Thursday, 9 June 2011
Held at 9pm on two successive evenings at Horse Guards Parade, this parade of military music is performed by the bands of the Queen’s Royal Cavalry and Foot Guards Regiments.

Spitalfields Summer Festival
Friday, 10 June – Saturday, 25 June 2011
Held at various venues near Old Spitalfields Market and its surrounding neighborhood in East London, this festival presents a series of musical concerts in a variety of genres. Some events are free, but tickets for other events can be purchased online.

Trooping the Colour
Saturday, 11 June 2011
This official celebration of the Queen’s birthday, featuring a military pageant of cavalry, foot guards, bands and more, is held each year at Horse Guards Parade. Crowds of spectators gather on the Mall between the Parade and Buckingham Palace.

Open Garden Squares Weekend
Saturday, 11 June – Sunday, 12 June 2011
Benefitting the London Parks & Gardens Trust, this is a garden lover’s chance to see private and/or secret gardens across the city. See the website for the list of gardens on view and information on buying tickets.

World Naked Bike Ride
Sunday, 12 June 2011
This truly inspired protest against oil dependency and car culture sees hundreds of Londoners peddle (or skate) themselves through the streets in nothing but the altogether. Participants will meet in Hyde Park at 3pm for a 3:30pm departure.

London Rathaytra (Hare Krishna Festival of Chariots)
Sunday, 12 June 2011
Held on and around Trafalgar Square, this is the Hare Krishna sect’s largest festival. There is no admission fee and vegetarian food will be available for purchase at surrounding booths.

Taste of London
Thursday, 16 June – Sunday, 19 June 2011
An outdoor food festival held on the grounds of Regent’s Park, highlighting 40 of the city’s best restaurants and 200 of its best food producers. Tickets can be purchased online.

BP Portrait Award
Thursday, 16 June – Sunday, 18 September 2011
In its 32nd year, this international juried exhibition encourages artists to focus on and develop portraiture in their work. Admission is free.

City of London Festival
Sunday, 26 June – Friday, 16 July 2011
With Oceania as its theme, this series of concerts, performances, sporting events, films and public art is held all over the square mile of the City of London. Tickets for performances can be booked by calling 0845 120 7502.