Getting from London to Oxford (and return) 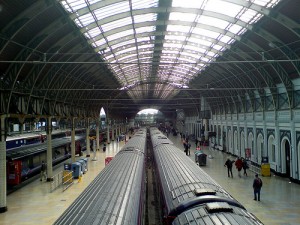 Oxford is the oldest university city in the UK and is located about 50 miles (80 km) west of London. The medieval churches and colleges dominate the modern town with their Gothic splendor. The lovely natural setting, along with the architecture and bustling modern life make it an excellent travel destination, even if you are not here to study.

While Oxford does have an airport, which is serviced by private and charter planes, the closest large airport to the city is London’s Heathrow Airport (LHR). Another large airport close by is Gatwick Airport.

The fastest way between London and Oxford is by train and if you purchase the ticket online and in advance, it can be as cheap as £4 one way. Another option is to get on a bus from Victoria Station (or Marble Arch, where all coach companies call at, as well) and pay from £1 for a single ticket (if you book online and in advance).

Trains from London to Oxford

Oxford is serviced by a train station, located west of the city center. The route to London Paddington is served by fast First Great Western trains, every half an hour. The travel time is about an hour. Single tickets start at £4 but can also cost £21.40 during off peak. Or you can buy “Anytime Day Single” ticket, which costs £26 , and is valid on any permitted route, any time of the day.

Buses from London to Oxford

The following coach services are available between London and Oxford:

Megabus buses depart from London’s Victoria Station every 15 minutes during the day and every half an hour during the night. They call at Marble Arch, Nothing Hill Gate and Shepherd’s Bush. The travel time is about 1 ½ h and the single fare starts at £1 (if you book online and in advance).

Single tickets cost £14 on Oxford Tube and the buses depart from Buckingham Palace Road. Express buses are available. The travel time is about 1 ½ h. Buses leave every 12 minutes to every hour, depending on the time of the day.

Single tickets on Oxford Express buses start at £13 if you buy from the driver. Buses depart from Victoria Station and also call at Marble Arch and Baker Street. Buses run every 15 minutes, regardless of the time of the day.

Driving from London to Oxford

Oxford is linked to London by M40 motorway. Depending on the traffic, it can take anywhere between 1h and 1 ½ h to drive the 50 miles. While you can easily rent a car in London and drop it off in Oxford, parking and getting around by car in Oxford is a nightmare.