Getting from London to Liverpool (and return) 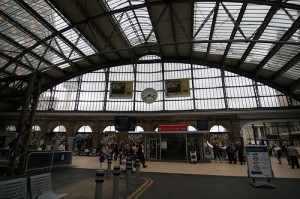 Liverpool is a lively city in England, known for the music, nightlife and sports. The Pier Head Waterfront is a World Heritage UNESCO site since 2004. Liverpool is home to the largest national museum outside of London and is also home to Europe’s oldest Chinatown.

Since London is very well served by low cost carriers and commercial airlines, most travelers prefer to arrive here and then travel to Liverpool by land.

The cheapest way to travel from London to Liverpool is by coach. The journey takes from 5h 10 min and the fares start at £7.50 one way.

Flights from London to Liverpool

Liverpool John Lennon Airport (LPL) is an international airport serving Liverpool and is located about 7.5 miles from the city center. It does not receive any direct flights from London.

A good alternative is Manchester Airport (MAN) , located about 45-60 min drive from Liverpool. The airport is the busiest UK airport outside of London and receives direct flights from the capital operated by: BMI (Heathrow) and British Airways (Heathrow, Gatwick).

Trains from London to Liverpool

Trains to Liverpool Lime Street Station depart from London Euston Station every hour and are operated by Virgin Trains . The journey takes between 2h and 2 ½ h , depending on how many stops the train makes.
Advance single tickets start at £61.00 (valid on the specified train only) , while anytime single tickets cost £130.50.

Buses from London to Liverpool

Coaches operated by National Express connect London Victoria Coach Station to Liverpool Coach Station. The journey takes between 5h10 min and 6 ½ h depending on the traffic and changes. Single standard tickets start at £7.50. Be careful though , when you book online the fare you find while you make the research might be cheaper than the fares you get when you book, if you don’t book at the same time you search for the information. That happens because you are given the lowest possible fare for your chosen departure day and time at the moment you check the fare.

Driving from London to Liverpool

There are three possible driving routes between London and Liverpool:

Choosing the best route is a matter of whether you want to go via Birmingham or not. The map below shows the route via M1: