Getting from London to Belfast (and return) 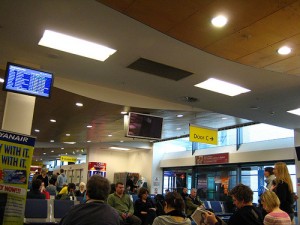 Belfast is the capital and the largest city in Northern Ireland, UK. It is the second largest city on the island of Ireland after Dublin and is located at the mouth of the River Lagan.

Getting from London to Belfast involves crossing the sea, so you’ll need to add the ferry into the route, whether you travel by bus, train or car.

The easiest, fastest and cheapest way to travel between London and Belfast is by plane. It costs about the same whether you fly London Luton to BFS on easyJet or from London Stansted to BHD on bmibaby (single fares start around £20).

Should you want to see the country as you travel, a good option is to travel by bus and ferry. But that involves quite a bit of hassle. First, take the bus to Glasgow, then another but to Stranraer , cross the sea and take another bus to Belfast. Starting with late November 2011, the new ferry crossing will be from Cairnryan, so add another bus ride from Stranraer to Cairnryan to the mix. Still, the entire journey costs less than £40 one way.

Flights from London to Belfast

Belfast is served by two airports:

Trains and ferries from London to Belfast 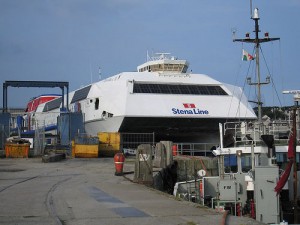 There are three possible routes to travel from London to Belfast by a combination of trains and ferry:

Route1 : via Holyhead and Dublin

This is the cheapest option. A combined single ticket is £44 and can be bough here.
Start the journey in London and take the morning train to Holyhead in Wales. Then taken the afternoon ferry to Dublin and from there take the evening train to Belfast.
Trains from London to Holyhead are operated by Virgin Trains and they depart from London Euston Station every hour.

This is the traditional route and takes the same time as the first route, but it’s slightly more expensive. Single tickets cost £49.
Leave London in the morning for Glasgow (Virgin Trains) and then another train for Stranraer (Scot Rail). Trains leave London Euston Station and the total travel time is about 6 ½ h
Then, take the Stena Line ferry to Belfast port.
Starting with late November 2011, Stena will use the Cairnryan port, which is not connected to the railway, so the route will involve an hour bus ride from Stanraer to Cairnryan port.

>>read more about Getting from London to Glasgow

This is a comfortable way to travel but you need to book the train and ferry tickets separately. Take the afternoon train from London to Liverpool and then take the overnight ferry to Belfast.
Trains tickets from London to Liverpool start at £61.00 one way (valid on a specific train).
Stena Line runs a ferry from Liverpool Birkenhead to Belfast and the single fare is £30.50 on the morning ferry and £49.50 on the evening ferry. The crossing time is 8 h.

>>read more about Getting from London to Liverpool

Coaches and ferries from London to Belfast

Another option is the “coach & ferry” from London to Belfast. This combined ticket is offered by Stena Line and the sailing is via Stranraer.
First, you need to take the bus from London to Glasgow Buchanan Bus Station. You can choose between Megabus and National Express . The travel time is between 8 h 20 min and 10 h, depending on the stops along the way. Single fares start at £12.50.

>>read more about Getting from London to Glasgow

From Glasgow Buchanan Bus Station take another bus to the Stranraer ferry departure and another bus to Belfast Europabus Centre.
There are two departures from Glasgow , at 10:50 a.m. and 4:35 p.m and the travel time is between 6h and 7 h 15 min, depending on the departure. The appex standard adult fare is £26.00 and includes the entire route from Glasgow to Belfast.

Driving from London to Belfast

There are two possible routes to travel by car from London to Belfast:

For the first route, if you cross with a small car, expect to pay from £133.00. The ferry crossing is 3h 15 min (and is included in the entire route above).

The map below shows the M1 route: