Getting from London to Cardiff (and return) 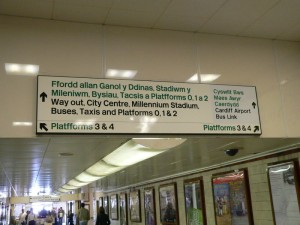 Cardiff is the capital of Wales and is located on the south coast of UK. With a history of an industrial city, Cardiff has changed a lot in recent years and is now a modern and lively city. It draws travelers interested in the Welsh culture and history, as well as those who want to go shopping in one of the best cities for such an experience.

London is served by a variety of low cost carriers as well as major commercial carriers which makes it easier to find good deals into one of its airports. So most travelers fly here and the travel to Cardiff by land.

The cheapest way to travel from London to Cardiff is by bus. For £7.50 one way you’ve complete the journey is about 3 hours.

Flights from London to Cardiff

Cardiff International Airport (CWL) is the only major airport in Wales and is locate 12 miles from the city center. The largest carrier at the airport is Flybe, but it is also base for Manx2, Thomson Airways and Thomas Cook Airlines.

Cardiff airport does not receive any direct flights from London. Connecting flights are available by way of Belfast City, Edinburgh or Dublin , with single fares starting at £116 (on Flybe) and the total travel time being almost 16 hours.

>>read more about Airfare to London

Trains from London to Cardiff

Trains leave from London Paddington Station and arrive at Cardiff Central Station, which is a major hub in the area and is located very close to the city center. The travel time is little over 2 hours (and depends on the number of stops along the way).

Buses from London to Cardiff

Coaches from London Victoria Coach Station to Cardiff Bus Station are operated by National Express . The travel time is between 3h 10 min and 3 ½ h, depending on the traffic. Single fares start at £7.50 but may be more expensive. When you look for a departure you are offered the lowest possible fare at the moment you make the choice, so expect the fares to change if you don’t plan to book the ticket when you look for the fares.

Driving from London to Cardiff

Cardiff is located 151 miles west of London and is connected to the city via M4 motorway. The drive time is about 3 h.