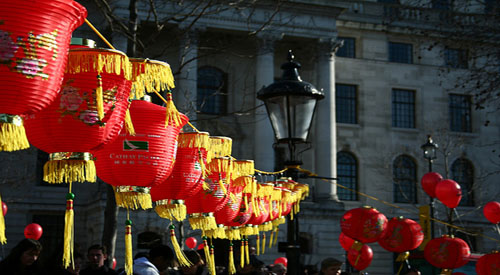 Firmly set in the low season but still full of excitement, February in London is your chance to find an amazing deal on a flight and hotel room, see Chinese lanterns and fashionistas, and have more elbow room to enjoy your favorite London attractions.

For February temperatures and suggestions about what to pack, see London Weather.

Chinese New Year
Sunday, 6 February 2011
Though the actual holiday is 3 February, London’s celebration will be held on the 6th from from 12-6 pm in Trafalgar Square and along Shaftesbury Avenue in neighboring Chinatown, with dance, music and acrobatics, as well as firecrackers, Chinese dragons and lions.

Valentine’s Day
Monday, 14 February 2011
For this couples’ holiday, try a romantic meal at the Oxo Tower Restaurant or Altitude 360° (both overlooking the Thames), a champagne flight on London Eye or a nighttime cruise on the Bateaux London.

LAST OF THE WINTER ICE RINKS

Premier League Darts
Thursday, 10 February 2011
The UK loves its darts competitions, and this tournament lead-in at the O2 Arena kicks off a series of 14 heats to be played across England, Ireland, Wales and Scotland. The play-off final will be held in May at London’s Wembley Arena. Tickets range from £22.50-33.25, and the closest Tube station is North Greenwich (on the Jubilee Line).

London Fashion Week
Friday, 18 February – Wednesday, 23 February 2011
At this trade-only event (not open to the general public), the world’s great fashion designers roll out their spring/summer collections at an extravaganza of catwalk shows, exhibitions and parties; all over central London during this period, you’ll be sure to see well-to-bizarrely-clad fashionistas shopping, lounging and not eating.

London Fashion Weekend
Thursday, 24 February – Sunday, 27 February 2011
In the hallowed halls of Somerset House, over 100 designers who have participated in London Fashion Week will sell items from their collections at knock-down prices. On from 10am-6pm each day, tickets range from £13-16 (for simple entrance to the sale) to £20-38.50 (for perks like a goodie bag and/or access to catwalk shows).

Ceramic Art London
Friday, 25 February – Sunday, 27 February 2011
He;d at the Royal College of Art, this is London’s premier ceramics show, featuring exhibitions of work from over 75 artists, as well as talks, films and more. Click here for info on tickets and here for info on getting to the RCA.