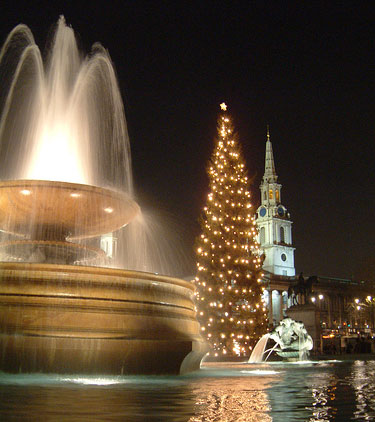 Ah, December: winter has come to London, with frost in the air and a little (or a truly great deal of) snow a-fallin.’ All across town, the city is putting on its holiday spirit, with twinkling lights, ice skating rinks and bustling Christmas markets.

With a celebration of the season happening almost every day, December is a festive, exciting time to be in London.

For December temperatures and suggestions about what to pack, see London Weather.

Christmas Tree Lighting in Trafalgar Square
Thursday, 2 December
6pm
Every year since 1947, a Norwegian spruce Christmas tree has been erected in London’s Trafalgar Square, presented by Norway to the people of Britain for its support of Norway during World War II. The tree lights will be offically turned on by the Mayor of Oslo and the Lord Mayor of Westminster in a ceremony that always draws a big crowd.

Christmas at St Pancras
Thursday, 2 December – Friday, 17 December
The train station concourse is transformed into a traditional Christmas scene, and in addition to late shopping nights, there will be ongoing musical performances by orchestras, choirs, pop artists and more.

VIP Shopping Day
Saturday, 4 December
Starting at 11am
Oxford Street and Regent Street, the two biggest shopping streets in London, will be closed to all but foot traffic. Many of the area’s shops will be offering treats like free champagne, mulled wine, eggnog, mince pies and more. In addition, there will be dozens of musical and theatrical Christmas shows.

Great Christmas Pudding Race
Saturday, 4 December
11:30am
Covent Garden Market hosts the 30th annual GCPR, organized to raise funds for Cancer Research UK. Competitors for the Christmas Pudding Trophy pay (as individuals or teams) to dress up in fun/nutty costumes and tackle an obstacle course …all while carrying a Christmas pudding on a tray.

Enchanted Woodland
Through Sunday, 5 December
5-8 pm Fridays, Saturdays and Sundays
Syon House (an estate on the banks of the River Thames near Brentford in west London) includes 40 acres of landscaped gardens best known for their collection of over 200 rare species of trees; for this event, over a thousand fairy lights are used to illuminate the woodland and lake area at night.

Christmas Past
Through Wednesday, 5 January
10am-5pm Tues-Sat, Sun-Bank Holiday Mondays 12-5pm (closed on regular Mondays)
The Geffrye Museum in Shoreditch hosts an exhibition of “400 Years of Seasonal Traditions in English Homes,” which illuminates why and how the rituals of a traditional Christmas evolved. The museum is free to enter.

Tower Bridge European Christmas Market
Through Wednesday, 22 December
10am-8pm
Features market traders from a variety of European countries selling arts and crafts, food, drink and a range of Christmas gifts and decorations. Entertainment at the market will include Santa Claus in his grotto, a wooden carousel, acoustic musicians, Christmas choirs, plus brass and classical ensembles. Held in Potters Field, on the south bank of the Thames; nearest Tubes are London Bridge or Tower Hill. Map

Greenwich Christmas Market
Through Friday, 24 December
Wednesday-Sunday and Bank Holidays, 10am to 5:30pm
In addition to the market’s usual array of handmade arts & crafts, food, antiques and produce stalls, there will be a Christmas tree and Santa’s grotto. To reach Greenwich Market, take the Tube’s Jubilee Line to Canary Wharf, and change to the DLR; take the DLR direct to Cutty Sark.

Peter Pan Christmas Day Race
Saturday, 25 December
9am
This freezing cold race, held annually since 1864 by the Serpentine Swimming Club at Hyde Park’s Serpentine, is only open to club members; consider it a spectator sport…for which you should dress warmly.

Bankside Frost Fair
Note: This event will not be held in 2010.
(Usually) held in Southwark, in front of the Tate Modern and Shakespeare’s Globe Theatre, this is a free event featuring parades, music events, shopping, food stalls and various workshops, the Frost Fair tries to capture the spirit of the original fairs held when the River Thames used to freeze over in winter.

AEGON Masters Tennis Tournament
Through Saturday, 5 December
Held at Royal Albert Hall since 1998, the ATP Champions tour’s longest-running tournament features a field of 12 players, including the top seven on the tour rankings plus five wild cards. Tickets range from £8.75-£95. The Royal Albert Hall is located on the south side of Hyde Park; nearest Tubes are Knightsbridge and High Street Kensington.