An Overview of London Neighborhoods: Part 3

North west of central London are two areas that are well known for the people that live there. Kilburn or ‘County Kilburn’ has had a long history of being a centre of the Irish commmunity in London but is also a very multi-ethnic part of town and Golders Green is probably the most well known Jewish community in London and there’s an important Jewish cemetery and a crematorium along the Finchley Road where the likes of H.G. Wells, Bram Stoker, Rudyard Kipling, Sigmund Freud and many other famous names had their funerals.

Just before you cross the North Circular Road, a major arterial route arcing through north London, is Neasden home to the largest Hindu temple outside India.Once over the North Circular you come to Wembley, famous for one thing, the stadium that was opened there in 1923 and was known ever after as the home of English football. Its currently being rebuilt, the last game there was in Oct 2000 and the new stadium was due to open in 2006 but because of problems has been put back a year. 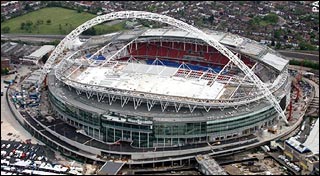 From Wembley onward it off into suburbia and golf course country through places like Harrow and Ruislip.

The M4 is a main route heading directly west of London, passing just north of Heathrow Airport. Close by is Southall, ‘Little India’, an area where almost 60% of the population is Indian or Pakistani and where anytime a muslim or hindu festival is on the streets become mobbed.

South of the M4 running to the River Thames are a couple of places visitors might find themselves looking for, Twickenham, a magnificent stadium where England play their home rugby matches and close to the river Hampton Court, a former royal palace of Henry VIII’s that’s a popular tourist attraction and famous for its garden maze. 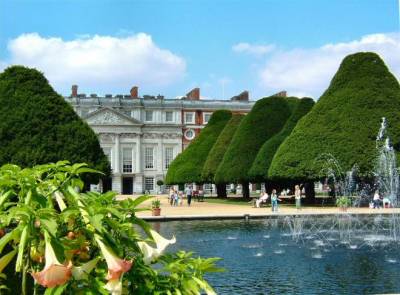 If you’re here in December and January they have an outdoor skating rink for the public in the grounds.

That southwest side of London is the where horseracing fans should head if they feel like a day watching the sport of kings. There are three racecourses within about 9 miles of each other, Kempton Park, Sandown Park and Epsom Downs, home of The Derby in June each year. Kempton has had a major renovation and now has night racing on its all weather track until December as well as its regular Flat and Jump meetings.

Heading back east following the path of the Thames from Sandown you pass through Kingston upon Thames and then come to the largest Royal Park in London, Richmond Park which is 2500 acres of woodland and gardens. The park is famous for the almost 700 deer that roam it but is also a major recreational sporting location for people in that part of London. Horse riding, Polo, Cycling, Rugby and Golf are just some of the sports available. Richmond Park is open from 7am-dusk in summer, 7.30am-dusk winter.

Adjacent to Richmond Park, across the A3 road is Wimbledon Common, 1,100 acres of woodland and parkland that are protected by law for public use. Wimbledon Village is a very sort after place to live with house prices to match and is also the home of the All England Club which hosts the Wimbledon Tennis championships every June/July.