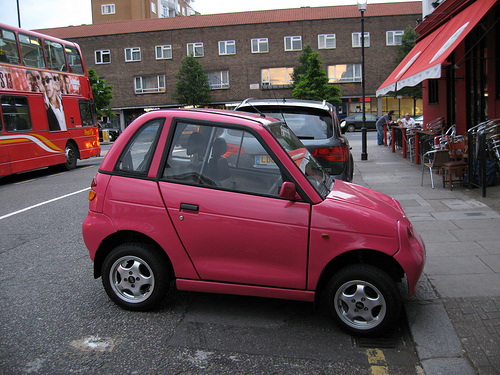 Driving in central London should only be considered by the most skilled and brave of visitors, as it often bears little advantage in terms of convenience and cost. In a city where the public transportation options are numerous, strategically located and often inexpensive, renting a car and paying to park it are generally inadvisable.

However, if you enjoy the freedom of calling your own transportation shots (and hearing the angry rush of blood in your ears), here’s what you’ll need to know about navigating London by car.

A visitor with a valid driver’s license issued by their home country is eligible to drive in London and the UK for up to 12 months. For more detailed information, see License info for visitors to the UK.

Tips for Driving on the “Wrong” Side of the Road

If you’re a first-time driver on London’s side of the street, you should always look at the symbols printed on the streets themselves (aka “road lane markings”) to help orient you as you drive. Since locals tend to park their cars on either side of city streets, regardless of which way they’re headed, it’s nearly impossible to rely on the positions of parked cars to help you determine which side of the street to stick to when driving.

One important rule: When you approach a traffic circle (or “roundabout”), give way to traffic coming from the right.

Use the following links to help familiarize yourself with driving in London:

Traffic offense-detection cameras come in two forms:
Square yellow boxes atop high roadside poles; designed to photograph cars that are exceeding the speed limit
Smaller grey boxes atop high poles, set beside traffic lights; designed to photograph cars that have run a red light
If you offend in either case, a photo of your car’s license plate will be sent to your car rental company, then to you.

Many of London’s streets offer Pay & Display parking meters (or “bays”), which allow you to pay for on-street parking by cash or credit card at machine kiosks and leave a visible receipt in your car. Click here for more information.

Nearly two-thirds of London Boroughs operate “phone parking” where you can call and pay by cell phone.
When parking, check parking signs for your local number.

For current information on what gas will cost and where to find stations: Petrol Prices

Petrol Prices asks for the zip code (or “postcode”)  of your general destination, and once you sign up with its site, will give you the day’s lowest price for gas, a few suggestions for gas stations, and a map to help you locate them.

The site also offers an iPhone app, an excellent idea if you’re headed off to multiple destinations or on a side trip.

London was the world’s first major city to introduce a congestion charge to reduce the flow of traffic into and around the city center from Monday to Friday. Since the charge was introduced in 2003, the number of cars entering the “congestion zone” has fallen, but be warned that driving in London can still be slow.

The city’s charge zone is denoted in each area by a large letter “C” in a red circle.

Each area is monitored by vehicle registration recognition cameras; failure to pay means a £100 fine.

As of January 4, 2011, the city’s charge zone will cover only these areas:

The charge applies:
Between 7am and 6pm Monday to Friday, excluding Bank Holidays and over Christmas

Here are instructions on paying your congestion charge by advance auto-pay, phone, text and more.