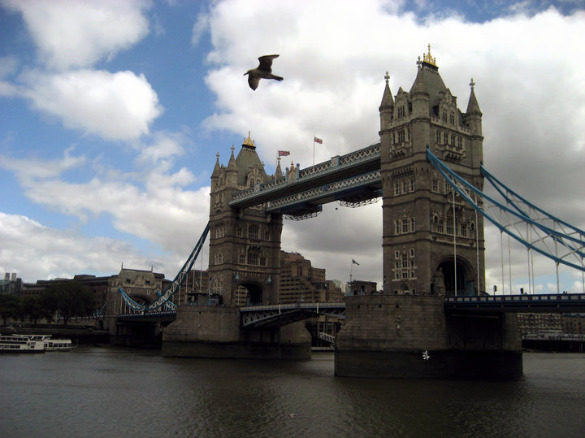 Tower Bridge is one of the most recognizable London landmarks, but yet many visitors mistakenly call it by the wrong name: London Bridge. (London Bridge is actually the next bridge west along the River Thames.)

Tower Bridge first opened in 1894 after eight years of construction. Its two towers are 213 feet (65m) high, and when the bridge is raised, it’s 135 feet high and 200 feet wide. It’s the last bridge over the Thames for around 20 miles, until the river reaches the huge QE11 Bridge at the Dartford crossing.

There are 300 steps to the bridge’s two towers, which are open to the public much of the year. The Tower Bridge Exhibition is open Apr-Sep 10am-6.30pm (daily), Oct-Mar 9.30am-6pm (daily). Tickets are £7 adults, £3 children; click here, though, for a complete list of admission prices.

One of the best ways to see the bridge is from the river itself. If you take a boat from Westminster Bridge or the London Eye to Tower Hill, the boat will draw parallel with the bridge as it slowly waits to moor; this is a good chance to get a photo.

On its north side, the bridge links the eastern part of the City of London with Bermondsey and Peckham, and on the south, with large parts of southeast London. The areas immediately to both sides of the bridge are bustling commercial districts. On the southern bank, you’ll find City Hall and Butlers Wharf , an old warehouse complex modernized with smart restaurants, shops and apartments. Head north over the bridge and on your left is the Tower of London, on the right St Katherines Dock, with its modern hotels, apartments, restaurants and yacht harbor.