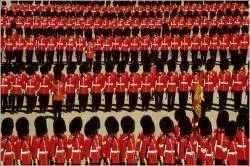 Every year on the 2nd or 3rd Saturday in June, the Trooping the Colour ceremony takes place on London’s Horse Guards Parade. An official celebration of the Queen’s birthday (which is actually in April), the is one of the UK’s biggest annual displays of military pageantry, with massed ranks of infantry, cavalry and military bands performing in their ceremonial uniforms.

Horse Guards Parade is the large parade ground at the eastern end of St James’s Park, just off The Mall through Admiralty Arch.

Temporary seating is erected for Trooping the Colour but is limited and allocated early in the year. If you miss out on a ticket and feel you can’t get close enough to Horse Guards to see properly, have no fear: at 10:40am, a Royal procession carrying the Queen will leave Buckingham Palace escorted by Household Cavalry, and there should be plenty of space along The Mall to get a good view.

At Horse Guards, the Queen will review the troops and take the salute. She used to do this on horseback, but now does it from a reviewing stand and horse-drawn carriage. After the colours have been trooped, the Queen heads back to Buckingham Palace. As the Royal Family later watches from a Buckingham Palace balcony, a gun salute is fired in Green Park at 12:52pm and an RAF flypast goes overhead at 1pm.

The entire event is a wonderful opportunity to get some truly British souvenir photos, with plenty of ceremony, pomp and circumstance.