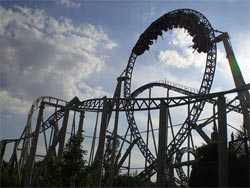 Those looking for a proper theme park near London should look no further than Thorpe Park, billed as “the UK’s Thrill Capital.” Located about 20 miles southwest of the city center and just a few miles south of Heathrow Airport, this is the closest amusement park for London-based roller coaster junkies.

Opened in 1979 on the site of a former concrete quarry, the 500-acre Thorpe Park has continued to add new rides every year as it’s gained in popularity. It’s part of the Merlin Entertainment umbrella, a company that includes the London Eye, Alton Towers, the Chessington World of Adventures and Madame Tussaud’s Wax Museums.

The season generally runs from mid-February to early November. For the first month of the season, the park is only open on weekends, and in August the park stays open until 8pm; otherwise, the park is generally open every day from 9:30am -6pm. Times can vary, though, so be sure to check specifics on the park’s schedule page.

Prices and discounts for admission

Basic prices are about £38 per adult/£24 per child when purchased at the park, or £26 per adult/£18 per child through the park’s advance ticket purchasing site. Online, you’ll also find tempting discounts for families, as well as great specials for groups of 7 or more.

Getting to Thorpe Park

If you don’t have a car and you are staying somewhere near central London, take a South West train from Waterloo Station to the Staines Station. You can then hop a Thorpe Park shuttle bus directly from Staines; the shuttle runs every half-hour during opening times.

Those coming by car should get to the M25 ring road near Heathrow and then take junctions 11 or 13; follow signs via A320 to Thorpe Park. Parking is free.

Map of Thorpe Park as it relates to London