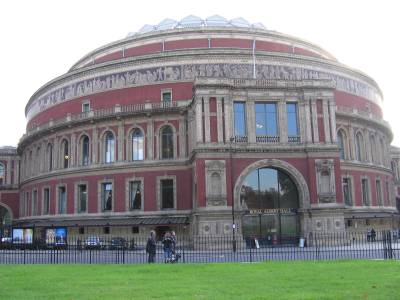 The Royal Albert Hall, located in South Kensington on the south side of Hyde Park, just opposite the Albert Memorial, is one of the most famous music venues in Britain. Though it’s generally known for featuring classical music, just about every type of music is played here, and it also hosts many non-musical events.

Built in 1871 in honor of Queen Victoria’s husband Prince Albert, and the large Romanesque amphitheater can hold around 8,000 people. The most famous annual event to take place here is the Proms, or the Sir Henry Wood Promenade Concerts, a series of classical music concerts that are performed throughout the summer. These concerts include the Last Night of the Proms, when British performers and audiences wrap themselves in the Union Jack, release armloads of balloons, and sing patriotic songs.

Since 1963, when the Royal Albert Hall hosted history’s only shared bill of the Beatles and the Rolling Stones, the Albert Hall has featured non-classical performances. Major rock acts regularly play at the Albert Hall, and it also holds comedy shows, tennis tournaments and even circus events.

The Hall features three restaurants, ranging from extremely elegant to a relaxed bistro (where both lunch and dinner are served) to a high-ceilinged bar atmosphere. All feature light meals and multi-course menus.