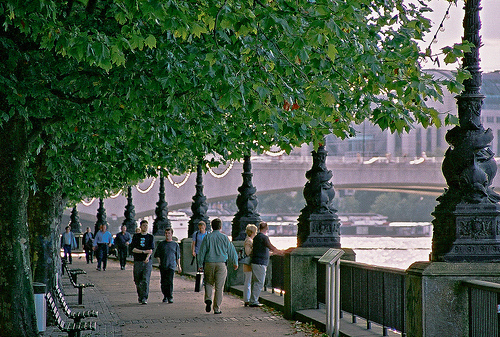 The bustling promenade between Waterloo Bridge and Blackfriars Bridge on the South Bank of the River Thames is known as The Queen’s Walk.

Created to honor Queen Elizabeth’s II’s Silver Jubilee in 1977, this founding stretch of the 184 mile-long Thames Path is one of London’s most important cultural centers for theatre, music and contemporary art. It’s also a lovely part of town in which to while away an evening or afternoon.

Here you’ll find the National Theatre, a series of unfortunately hideous buildings that nonetheless put on some of London’s finest productions; with three stages, the NT puts on everything from drama to children’s theater, musicals and comedies. Its unique NT Live! program enables live performances to be simultaneously broadcast in movie theaters both in and outside of the UK.

Nearby, beneath Waterloo Bridge, the British Film Institute’s National Film Theatre shows independent and foreign language films. Outside in front of the building, you’ll find a second-hand book market that also features a wide range of lithographs and antique maps.

Just west of Waterloo Bridge is the Southbank Centre, a large cultural complex that incorporates two major concert spaces, the Royal Festival Hall and Queen Elizabeth Hall; the Purcell Room, a more intimate music hall; the singular Poetry Library, which houses the UK’s national collection of modern poetry, as well as works from around thew world; and the austerely-designed Hayward Gallery, the city’s second-most important exhibition site for contemporary art (after the nearby Tate Modern). In the summertime (generally starting in May), the fun, unusual and outdoor E4 Udderbelly space pops up here, featuring comedy, dance performances and more.

Along Queen’s Walk there are a number of small wharves, where thoughtful redevelopment has transformed the formerly industrial South Bank. 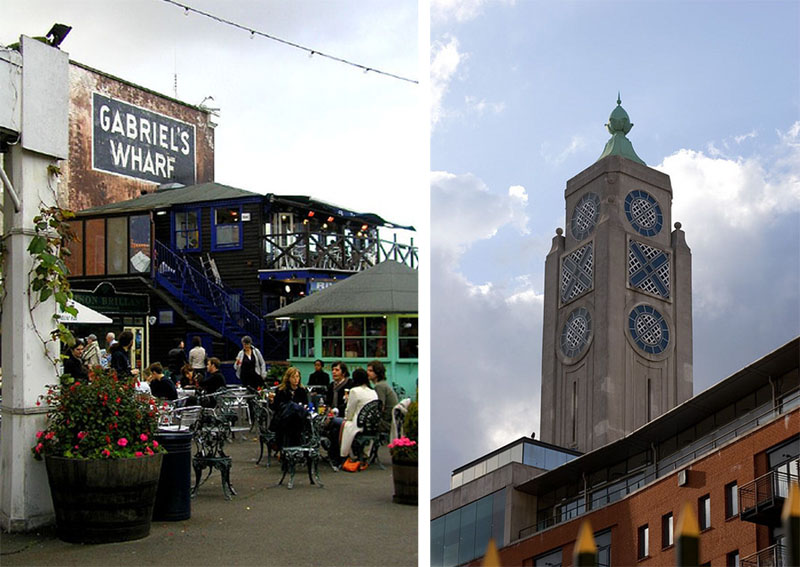 Just past the London Television Centre (home of the ITV television network), is Gabriel’s Wharf, a riverside collective of restaurants, cafes, and independent craft shops selling handmade fashion, jewelry, art and interior furnishings. At lunchtime on a sunny weekday, this is a great place to see locals at (temporary) leisure.

Just up from Gabriel’s Wharf is the Oxo Tower Wharf, an art deco-style complex formerly used for the manufacture of Oxo beef stock cubes. The popular space, now converted, houses the well-known rooftop Oxo Tower Restaurant, which offers some of the city’s greatest views of the Thames.

On the lower floors are apartments; specialty design shops for ceramics, glass, lighting, furniture and fashion; and two significant art exhibition spaces, the gallery@oxo and Bargehouse.