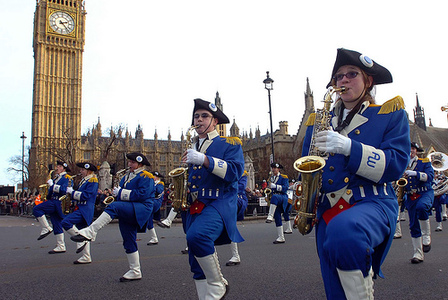 The 25th anniversary edition of London’s New Year’s Day Parade will take place on Saturday, 1 January 2011. Organizers are hoping half a million people will push aside their hangovers, forego the snooze button and stream into central London to watch the 2.2 mile parade.

The Parade starts at 12 noon on the corner of Piccadilly and Berkeley Street outside the Ritz Hotel, and finishes around 3pm near Parliament Square. The 10,000 performers taking part will make their way from Piccadilly to Piccadilly Circus, Lower Regent Street, Waterloo Place, Pall Mall, Cockspur Street, Trafalgar Square and Whitehall, finishing on Parliament Street.

The 25th anniversary parade will include giant balloons, a metric ton of cheerleaders and marching bands from the US, and performers from 20 countries worldwide. As part of the annual “Let’s Help London Challenge,” competitors from across the city will present creative and elaborate floats and acts to represent the unique character of each of London’s 31 boroughs, in the hopes of winning a prize for local charities (and bragging rights). Throughout the parade, additional fundraising efforts will be made as charity volunteers request your spare change.

The parade will be televised on several networks for the full 3 hours, but if you’d like to experience this truly local celebration in person, you can purchase Concession or Grandstand tickets or simply arrive early to jockey for a standing position along the route.

New Year’s weather  in London is generally wet and cold, so if you plan on watching the parade in person, be sure to bundle up against the potential chill. As this event always draws a huge crowd, it’s also advisable to wear a hat to keep your head warm and dry, rather than bring an umbrella.