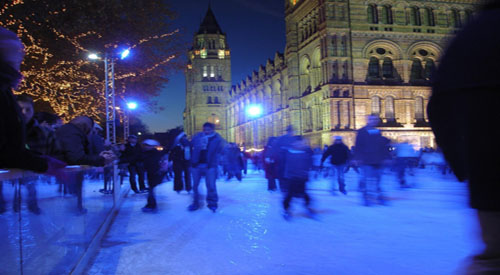 Outdoor ice rinks have become increasingly popular in London over the last few years, opening for a month or two on either side of Christmas.

Many of London’s top tourist attractions have taken the opportunity to install rinks, taking advantage of some of the city’s most spectacular settings to provide uniques places to skate.

Here’s a rundown of where you can go to try your hand at alfresco ice skating in London this winter:

Alexandra Palace
Due to re-open in January 2011
The Ally Pally, as its affectionately called by locals, has spent the latter half of 2010 refurbishing its 20 year-old ice rink with a fancy new, larger and eco-friendly model. Map

Broadgate
Open through Sunday, 23 January 2011
Situated amdist the office blocks of the Broadgate Centre next to Liverpool Street station, this rink is open seven days a week at various times during the day. Adults £9 per session, skate hire £2. Map

Hyde Park
Open through Tuesday, 4 January 2011
Part of Winter Wonderland, which features a German Christmas market, a Big Wheel, toboggan slides, cafes, bars, a Santa Claus and carol singers. Located in the southeast section of Hyde Park, the rink is open from 10am-10pm with tickets for adults £10-12.50. Map

London Eye
Open through Wednesday, 5 January 2011
Arguably the most popular tourist attraction in London, South Bank‘s gleaming wheel-upon-Thames now also features the adjacent Eyeskate. Adult combo fares for a spin on the wheel and one ’round the rink start at £28.45. Order online to save 10%. Map

Somerset House
Open through Sunday, 23 January 2011
Located on the north bank of the River Thames next to Waterloo Bridge, Somerset House claims to have the most beautiful outdoor rink in London; when the large courtyard that surrounds it is lit up at night, it’s hard to argue. The rink features skate lessons for adults and kids, wheelchair sessions, special DJ nights and more. Open daily from 10am-10.15pm. Adult tickets are £10.50-13. Map

Tower of London
Open through Sunday, 9 January 2011
The rink is installed in the Tower’s dry moat, the only time of the year visitors can access this area. Hour-long sessions run daily from 10am-10pm. Adult tickets £10-12. Map

Westfield London
Open through Monday, 3 January
This swanky White City shopping mall near Shepherd’s Bush features an ice rink along with dozens of retail shops, a movie theatre and an array of restaurants. Session times vary widely throughout the week from 9:15am to 11pm; check this list of times before planning your visit. Adult tickets £9.50-10.50. Single tickets subject to a £2 fee. Map