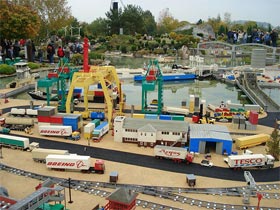 Of all the theme parks near London, Legoland Windsor is definitely the best choice for young families. The park is designed for children from 3 to 12, although accompanying adults and slightly older kids should find the place quite entertaining, as well.

There are over 50 rides as well as live shows, workshops, and other attractions aimed squarely at younger children, and especially those who are already fond of the iconic building-block toys

As is typical of theme parks in general, Legoland Windsor has various areas within its borders that each have their own theme around which all the rides and decorations are based. Some of the more notable areas in Legoland include:

Miniland: Around 40 million Lego bricks were used to recreate many famous London attractions as well as parts of France, Italy, Netherlands, and Sweden.

Duploland: This area for younger children features a fairy tale boat ride, some waterslides and fountains, and a couple of mini-golf courses.

Traffic: The theme here is transportation and the main draw is the famous Legoland Driving School, which allows kids to drive a Lego car through simulated city roads before earning a novelty license. There’s also a boating school and a firemen attraction.

Land of the Vikings: This new area contains a river rapids ride and other water-themed adventures.

Adventure Land: This area contains ‘thrill rides’ for the target audience, including a roller coaster, a Wave Surfer, and a car ride.

You can find more information on the official Legoland Windsor website, but it’s more than a little confusing in places. 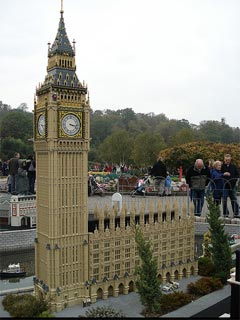 In 2008 Legoland Windsor introduced a new system where you can rent a Q-Bot device for £10 for up to 6 people, and then schedule times on 14 different major rides without having to stand in the queues. You just enter your desired time and then show up in the special queue then and your group can walk right in.

Legoland Windsor is open from mid-March through early November, but is closed weekdays during spring and fall; from late May through early September, the park is open every single day, though the hours vary a bit from day to day. The park generally opens at 10am, but closing times vary seasonally, from 7pm to 10pm.

Plan in advance by checking the park’s calendar page.

Buy online and save £3 per person, and check out their passes and special offers for further discounts. For example, an annual pass can be purchased for only about 40% more than a single day pass.

The park offers incredible discounts for those willing to book visits well in advance for days that aren’t likely to be overly crowded. Check out their special offers page, where they sometimes offer admission for half off or so.

Getting to Legoland Windsor

They have pretty good directions on the park site, which are especially handy for those driving themselves.

By road: Legoland is about 8 miles west of Heathrow Airport on the B3022 Windsor/Ascot road just two miles from Windsor town centre. It’s easily reached via the M25 and clearly signed from the M3 (Junction 3), M4 (Junction 6) and all approach roads. Parking is free, however there is Preferred Parking for those who wish to park closer to the entrance, at the cost of £6 per car. Annual Pass holders can park for £4 per visit or £11 per season.

By rail: Just half an hour from London Paddington to Windsor & Eton Central, via Slough First Great Western; or direct from London Waterloo to Windsor & Eton Riverside South West Trains. There is a shuttle bus service to the park from stops close to both rail stations; please note that this is a chargeable service and is not operated by the park. The first bus leaves Windsor at 10am and the last bus leaves 30 minutes after the park has closed.