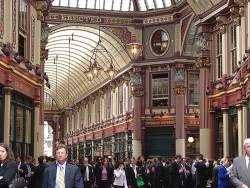 If you’re around the Liverpool Street or Monument areas of the City of London,take a walk along Gracechurch Street to have a look at one of the oldest markets in London.

Leadenhall Market has cobbled walkways and colonnaded rows of shops supporting a splendid curved roof of wrought iron and glass. The walls, columns and shop fronts are all ornately decorated with maroon, cream and hunter green paint, finished with a flourish of gold leaf. Leadenhall’s purely Victorian arcade is a complete contrast to its neighbor, the futuristic Lloyd’s of London building (just outside the market’s east entrance).

The Romans originally built a forum on this site in the 1st century and it’s been a food market since the Middle Ages. In 1321, it became the meeting place for London’s poulterers, and in 1397, cheesemongers were bound to take their produce there. Parts of the market were destroyed in the Great Fire of London in 1666; when it was rebuilt it was divided into the Beef Market, Green Yard and Herb Market. Leadenhall’s present structure was built in 1881 from a design by City of London architect Horace Jones. 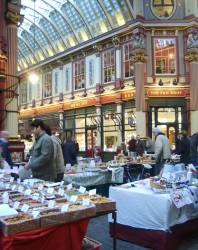 Over the years, Leadenhall was famous for its fresh fish, meat and poultry, but these days the shops have been converted into bars, pubs, restaurants, cafes and clothing stores; the latter are open Monday-Friday from 7am-4pm and are popular with the area’s office workers.

Recreating a bit of the old tradition, every Friday from 10am-4pm, stalls set up in the middle of the market selling gourmet food items. Fans of Harry Potter might also be interested to know it was used as the setting for Diagon Alley in the film version of JK Rowling’s first book, Harry Potter and the Philosopher’s Stone.

Leadenhall Market is located off Gracechurch Street between Leadenhall Street and Fenchurch Street; just look up for the Lloyd’s building if you’re feeling lost. The nearest Tubes are Monument, Bank and Liverpool Street. Map