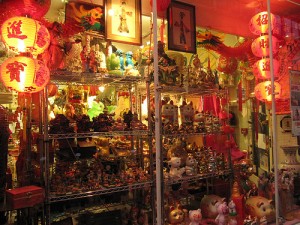 London’s had a Chinese community since the 19th century, when Chinese sailors brought to London as employees of the East India Company settled in the East End around Limehouse, close to the old Docklands area.

During the Second World War, bombing damage to Limehouse prompted the community’s migration west to Soho, in the area just south of Shaftsbury Avenue. When British soldiers returned from the war with a newfound taste for Chinese food, they inspired the opening of a slew of restaurants; by the 1960s, these were staffed by a whole new population of immigrants from Hong Kong.

Today, London’s Chinatown is centered on Gerrard Street in SoHo, a long strip of exclusively Chinese restaurants , shops and markets. Quite a few of the surrounding streets have a Chinese identity with street signs in both English and Chinese.

There are three traditional Chinese arches, one at each end of Gerrard Street and one off a side street leading into Gerrard Street. Though these are about 30ft high, they’re actually miniature versions of the real thing. Gerrard Street is technically unable to take the weight of a full arch, but Westminster Council is working with the London Chinatown Chinese Association and the Chinese Embassy to put a full size one at the junction of Wardour Street and Coventry Street. 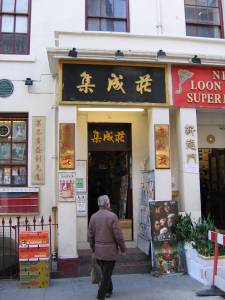 The council is also considering making Lisle Street (just south of Gerrard Street) pedestrian-only to ease visitor use of the narrow, well-trafficked area.

Chinatown and Gerrard Street are in the heart of London’s West End, just off Shaftsbury Avenue. The nearest Tube station are Leicester Square or Piccadilly Circus. Map