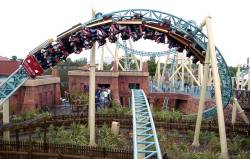 Visitors to London who are traveling with children (or merely like a good old-fashioned adrenalin rush) have a number of exciting London area theme parks from which to choose:

Thorpe Park is located just to the southwest of Heathrow Airport and the town of Staines, next to Junction 12 of the M25. Set amongst 500 acres, Thorpe has plenty of rollercoasters (Colossus, Stealth, Detonator and more) and water-based rides. If you like traveling upside down at 100mph, this is probably the place for you. Thorpe Park is closed during the winter months; the closer it gets to summer, the longer it stays open.

Chessington World of Adventures, located about 12 miles southwest of the London city center, is aimed at the whole family. For smaller kids there are ToyTown and softplay areas, gentle boat rides and various live shows throughout the year; for older children and adults there are larger water rides and rollercoasters, an Animal Land with gorillas, big cats, a Monkey and Bird Garden, sea lions and more. Themed sections include Forbidden Kingdom, Land of the Dragons, Transylvania, Mystic East and Mexicana.

Legoland Windsor is a sister theme park to Legolands in Denmark, Germany and California and as the name suggests is located near Windsor, just to the west of Heathrow. It’s mostly aimed at families with kids about 12 or under and has areas that include Miniland where 35 million lego pieces recreate famous European landmarks, Waterworks, Rattrap, a wood and rope climbing area, Orient Expedition, Magic Theatre and Enchanted Forest and others.

There’s a boating school, a balloon school and a Digger Challenge where kids can drive 10 full size mechanical diggers and a driving school where 6-13 year olds can drive electric cars. There are some larger rollercoasters, but the park is mainly for kids who come with parents. It’s fairly easy to reach either by car or by train, and they have good special deals for those who buy tickets advance on their website.

Adventure Island is in the seaside town of Southend which is about 40 miles due east of central London and very straightforward to reach. This might be a better choice than some of the other parks around London as it shouldn’t get as busy. There are over 30 rides to go on, 10 of which are restricted to a minimum height of 1.2m. It’s free to enter Adventure Island, and ride tickets can be purchased individually, but most people will prefer to buy a wristband that allows them on appropriate rides. Wristbands for smaller children also allow one accompanying person 14 and over on the ride. To get there by train take the One train from Liverpool Street to Southend Victoria station or the c2c train from Fenchurch Street to Southend Central. If going by car the A12/A127 or A13/A127 puts you right into Southend.

Dickens World located in Chatham on the north coast of county Kent, is just a short trip from central London. This indoor park is inspired by British literary great Charles Dickens, who lived his early life in the area. It’s open daily and is within easy reach from Charing Cross, London Bridge or Victoria stations.

If you’re thinking about coming over to see what the theme parks in the UK are like, don’t forget that by booking your flights and accommodation through us, you’ll save money…to spend on entrance to the parks!