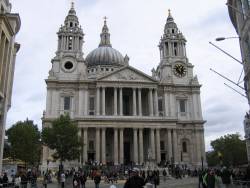 St Paul’s Cathedral is one of London’s most iconic symbols and popular visitor attractions. Impressive and ornate, a visit here is a dazzling means of immersing yourself in the city’s long history.

As the seat of the Bishop of London, there’s been a cathedral on the site of St Paul’s since 604AD — yet rarely the same one for long. After pillaging Vikings destroyed the first cathedral, it was rebuilt in 962AD; the third version went up after a 1087 fire burned it to the ground.

This stood until the Great Fire of London in 1666, when architect Sir Christopher Wren was asked to design yet another St Paul’s. With a large swath of the city center in ashes, the cathedral was just one item on Wren’s long to-do list; he had essentially been tasked with creating a new London.

The St Paul’s that Wren ultimately designed wasn’t nearly as conservative as the Church had hoped, but they finally relented in 1675. Once work was under way, Wren changed the agreed-upon design to include the now-famous 360 foot-high dome, second in size only to that of St Peter’s in Rome. The cathedral, made from Portland stone in the shape of a cross, took 35 years (and a great deal of Wren’s vitality) to complete.

The main entrance to St Paul’s is on its western side, from the Ludgate Hill approach; two tiers of giant columns seem to protect the entrance. The two towers on either side of the western face were added by Wren in 1705; both were meant to feature clocks, instead of just one. Outside the front of the cathedral is a fenced-off statue of Queen Anne.

St Paul’s has a long tradition of association with some of British history’s most important people and events. The cathedral has hosted the funerals of the Duke of Wellington, Lord Nelson and Winston Churchill, and in 1981, the lavish wedding of Prince Charles and Lady Di.
Beneath St Paul’s, there’s a large crypt containing the tombs of Nelson, Wellington, Wren himself, Florence Nightingale and other historical figures. You’ll find a bust of T.E. Lawrence (otherwise known as “Lawrence of Arabia”) but the adventurer wasn’t buried here. 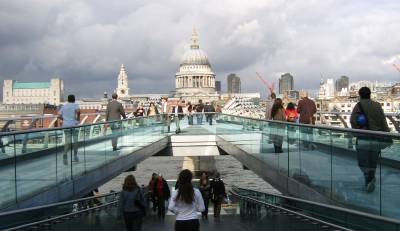 The crypt, like the main hall above, also forms a cross; the right side of the cross as you face east is called the South Transept. Here there are monuments to Lord Nelson, regarded as Britain’s greatest naval hero; Captain Scott, who died trying to be first explorer to reach the South Pole; and one of Britain’s most beloved painters, J.W. Turner.

In the top eastern end of the cathedral is The Aspe. Behind the high altar you’ll find the American Memorial Chapel, a monument to Britain’s gratitude to the US for their help in World War II; a roll of honor lists the names of 28,000 Americans who died in the effort.

Inside the cathedral’s dome, there are three high galleries you can ascend to and walk around. 93 ft above the floor is the Whispering Gallery, so named because someone standing diametrically opposite the dome can hear a whisper as clearly as if it was spoken in their ear. Above is the Stone Gallery at 173ft, and the 280 ft Golden Gallery provides outdoor walkways to allow great views over the city.

Since the cathedral was finished in the early 18th century, the area around St Paul’s has been built up quite a bit, making it difficult to get a clear photo of the dome. However, if you stand on the Millennium Bridge (which lies straight across the Thames from the Tate Modern), you’ll find yourself right in line with the St Paul’s. In fact, a walk across the bridge is a whole series of exciting London views, and shouldn’t be missed.

St Paul’s Cathedral is still in use as a church every day, with regular Communion and quite a few special services. It’s located in the heart of the City of London at the eastern end of Ludgate Hill; the nearest tube is St Paul’s. The cathedral is open to visitors Mon-Sat from 8.30am-4pm and there’s a £9 charge for adults, children 7-16 £3.50.