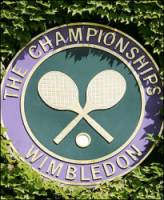 The Wimbledon Tennis Championships, played on the famous grass courts of the All England Club in southwest London, are one of the highlights of the sporting year in Britain.

The tournament at Wimbledon lasts for two weeks between late June and early July, with the world’s best players competing in men’s and women’s singles, doubles, mixed doubles and junior events.

There are nineteen courts in use at Wimbledon, allowing fans a great chance to see some action. The two main show courts are Centre Court (which seats 14,000) and No.1 Court (which seats 11,000).The most high-profile matches, featuring the very top seeds or defending champions, usually take place on these two courts.

Tickets
The best Wimbledon tickets, to the Centre, No.1 and No.2 Courts, are initially offered via a public ballot, for which applications close the previous December 31st.

However, an additional 500 of the most desirable tickets are retained for each of the three courts; these are sold at All England Club’s turnstiles (at Gate 3 in Church Road) every day of the tournament except the last four. Around 6,000 ground tickets – allowing use of the free-standing enclosure on No. 2 Court and unreserved seating and standing round Courts 3-19 – are available each day for cash only purchase at the turnstiles.

If you purchase a ground pass for the day for Courts 2-19 and there’s less than one hour’s play due to inclement weather (an occasional occurrence during the British summer), you’ll get a full refund as long as you bought your ticket before 5pm.

Ticket prices vary according to tournaments days and courts; the earlier in the competition, the less expensive the tickets.

Queueing
Many die-hard tennis fans will queue up overnight for a chance to purchase show court tickets. Wimbledon stewards, on duty 24 hours a day, give a dated and numbered Queue Card to each hopeful fan as they join a queue; this card provides evidence of your presence and position in the queue and must be retained until your tickets have been purchased.

If you’re camping out overnight in this queue, you’ll be woken around 6am by the stewards and asked to clear up any tents and sleeping bags; outside the tournament grounds, there’s a Left Luggage facility (which opens at 6:30am) where you can leave the one bag per person that you’re allowed. At 7:30am, stewards will issue wristbands to those towards the front of each queue who are queueing for tickets for Centre Court, No.1 Court or Court 2.

The entrance turnstiles will open at 9:30am, though most of the Grounds don’t open until 10:30am. Play on the courts is generally scheduled to start at 1pm.

Getting There
The All England Club is located about six miles southwest of central London in the leafy suburbs of Wimbledon, close to Wimbledon Park, Wimbledon Common and Richmond Park (Map). Fans planning to drive there will generally find parking a problem; it’s much easier to use public transport.

BY TUBE:
Southfields and Wimbledon Park Underground stations (both on the District Line) are about half a mile from the All England Club.

BY TRAIN:
National Rail overground trains leave Waterloo station and take about 14 minutes to get to Wimbledon. The Wimbledon train station is just under a mile away from the All England Club.

SHUTTLE BUS:
A direct shuttle bus service runs all day from Wimbledon and Southfield stations to the All England Club for the duration of the tournament.

BY BUS:
Go-Ahead London operates a bus service direct from central London to the tennis at Wimbledon, every 30 minutes over the two weeks.

You’re not going to find the Wimbledon area overrun with hotels; public transport makes the championships easily accessible from other parts of the city where a greater range of accomodation can be found.