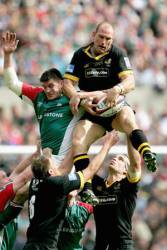 The domestic rugby union season comes to a climax this Saturday 12 May, with the Guinness Premiership Final being played between Gloucester and Leicester at Twickenham stadium in West London.

The Guinness Premiership is the top division for English professional clubs and features 12 teams who play each other home and away. Once each has played 22 games the top four will playoff, with first playing fourth and second playing third for the right to get to the final.

This year the clubs finishing the season one and two, Gloucester and Leicester have both made it through. This is Leicester’s third successive final but they’ve lost the previous two and haven’t beaten Gloucester since 2005, they also lost the last time the two clubs played at Twickenham in 1978.

Twickenham is a fantastic 82,000 seat stadium close to the River Thames not far from Richmond and there are still £25 and £40 tickets available for the final, which kicks off at 2.30pm and is preceded by Devon v Yorkshire in the County Under 20 Final at 9am and the RFUW Super League Final at 11.10am.

Both Gloucester and Leicester have vocal sets of fans, so if you want to experience a game at the home of English rugby, this would be a great occasion to go along to.