Travel Tips for the 2011 Champions League Final in London 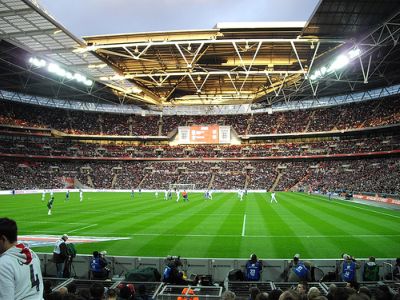 There are, of course, countless reasons why you might be planning a trip to London. Maybe you’ve always wanted to hear Big Ben chime out the time (instead of just “listening” on Twitter). Maybe you’re hoping to relive some of the London scenes from “The Da Vinci Code.” Maybe you want to see some of those great photo-ops overlooking historic London from the modern London Eye.

Or maybe you’ve got tickets to the biggest game in club football in the world – the Champions League Final.

The Champions League Final is in a different location every year, but in 2011 it’s being held in London’s storied Wembley Stadium. (Nevermind that players are always complaining about the pitch, it’s a great place to watch a game.) Regardless of who ends up being in the final game, there will be thousands of footy fans traveling to London for the Champions League Final, ready to watch the winning team raise the coveted trophy.

If you’re one of the people for whom the Champions League Final at Wembley is on the travel to-do list this year, the good news is that since the game takes place in late May it’s just before the start of the real London high season. The bad news is that London is expensive no matter when you visit – so unless you’ve got bucketloads of money to splash out on airfare and accommodation, you’ll want to do your homework to find the best deals for your trip.

It’s notoriously expensive to fly into London, especially if you’re looking at flying to Heathrow. Be sure to check all London airports for deals, as you may find cheaper flights into Stansted or Gatwick than Heathrow – and if you’re still not seeing any bargain tickets, it doesn’t hurt to check for cheap flights to Europe in general. If you find a great price on a ticket to Paris or Amsterdam, it’s pretty easy to get from either of those cities to London either by Eurostar, boat, or a short flight on a budget airline.

Once you’re in London, the next big budget-eater is accommodation. There’s no shortage of hotels and hostels in London to choose from, but just doing a general search for “cheap London hotels” is going to make you want to pull your hair out. You’ll get lots of results, it’s true, but the list will be overwhelming – and besides, if you’re in London for the Champions League match, you might want to pick a hotel that’s closer to Wembley.

Since Wembley isn’t in central London, you’ll either need to commit to booking a hotel right next to the stadium or stay closer to the city center. The former situation will mean a short commute to the game, but a long commute to any sight-seeing you want to do. The latter arrangement will mean one longer commute to Wembley and much easier access to London’s sights. To avoid a ridiculously long Tube trip to Wembley from your hotel, however, it’s advisable to look at hotels that are on the northwestern side of London – since that’s the direction you’ll need to go to get to Wembley anyway. Some of the neighborhoods you may want to check out are: